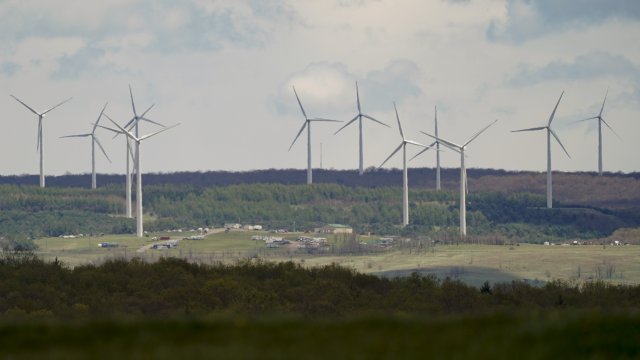 There could have been much more growth, but 10 gigawatts of clean energy — about the equivalent of 200 projects — were delayed.

You’ve heard one of the excuses a lot: supply chain issues. The renewable equipment built abroad is sitting in those containers at ports, just like lots of stuff you want to buy.

Then there’s the grid problem: Only 386 miles of new transmission lines were built last year, which is not enough to move the clean energy around the country. There are 5,000 more miles planned for the next three years, but there’s no guarantee those lines will be built.

Nine states currently have no wind turbines. They’re almost all in the Southeast and along the Gulf Coast. Arkansas, while on the list, is building some now.

Finally there’s the political headwinds, and the question about the future of renewable tax credits.

The amount of new projects didn’t increase from previous years, meaning growth was flat. If the U.S. maintains that rate, the country will only generate 35% of what’s needed to be net carbon grid neutral by 2035.