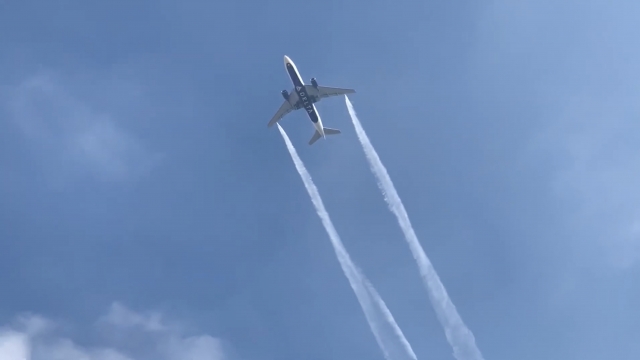 Delta and LAX said the plane "conducted an emergency fuel release while in flight" and later landed safely.

Multiple outlets report that over 50 people, many of them children, were injured. No one was transported to the hospital.

Justin Guiti, a 5th grade student said: "It sprayed all over my friends and on me, and it got in my eye and I'm blurred ... Bits of water were coming down. I thought it was a rain, but when I looked up it was gasoline. Everybody started running.”

Miguel Cervantes, a 6th grade student said: “Something was coming down. I thought it was smoke, but when it went down, I felt it, and it smelled like gas ... My skin was itchy.”

The Los Angeles Unified School District said: "Students and staff may have been sprayed by fuel or inhaled fumes. Paramedics are treating those complaining of skin irritation or breathing problems."

Delta said after the incident: "Shortly after takeoff, Flight 89 from LAX to Shanghai experienced an engine issue requiring the aircraft to return quickly to LAX. The aircraft landed safely after a release of fuel, which was required as part of normal procedure to reach a safe landing weight. We are in touch with Los Angeles World Airports and the LA County Fire Department and share concerns regarding reported minor injuries to adults and children at a school in the area."

The FAA said there are special procedures for aircraft coming into and out of major U.S. airports. The agency said those procedures "call for fuel to be dumped over designated unpopulated areas, typically at higher altitudes so the fuel atomizes and disperses before it reaches the ground." The FAA is investigating the incident.