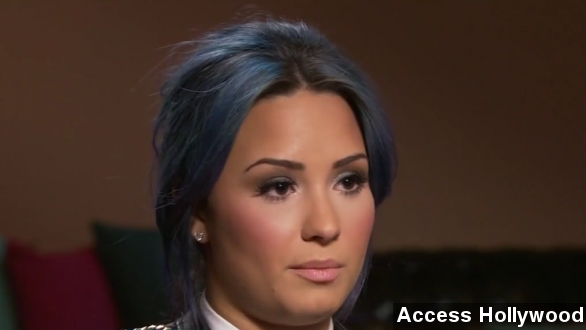 The singer and 'X Factor' judge reveals the harsh realities of her drug and alcohol abuse in a new interview.

Demi Lovato has always been pretty hush-hush about the reasons she headed to rehab more than three years ago — until now.

With her mother by her side, the "X Factor" judge opened up to Access Hollywood about the extensive substance abuse that made her hit rock bottom at age 18.

"I couldn't go without, probably 30 minutes to an hour, without cocaine." (Via Access Hollywood)

Lovato admitted she would even bring the drug onto airplanes and sneak off into the bathroom to do it — even though she had a sober companion watching her. She kept her drug use hidden. (Via ABC / Jimmy Kimmell Live)

The singer has previously talked about her battle with bipolar disorder, an eating disorder and cutting herself as a way to cope — but this is the first time she has admitted to a major drug problem. (Via Hollywood Records / Demi Lovato)

And Lovato says her problem wasn't just with cocaine.

"I had a Sprite bottle just filled with vodka, and it was just nine in the morning, and I was throwing up in the car." (Via Access Hollywood)

That fateful day was when Lovato claims she realized she had a problem — and she says she hasn't had a single drink since.

The 21-year-old, who now lives a healthy, sober life, suddenly withdrew from the Jonas Brothers' tour in October 2010 to enter rehab for "physical and emotional issues." (Via Examiner)

Even when she finally got herself to the treatment facility, Lovato says she had a hard time letting people help her at first.

But the singer successfully completed her rehabilitation treatment in 2011 and says she has lots of reasons to continue her sober lifestyle. (Via Radar Online)

"There’s a lot of young people who look up to me, and I just ... there needs to be someone that stands out and says, it’s not about you know, modeling and partying and all that stuff, you know?" (Via CBS / "The Late Late Show")

Lovato promises to reveal even more about her battle with addiction and staying strong in her next book, a tell-all memoir.