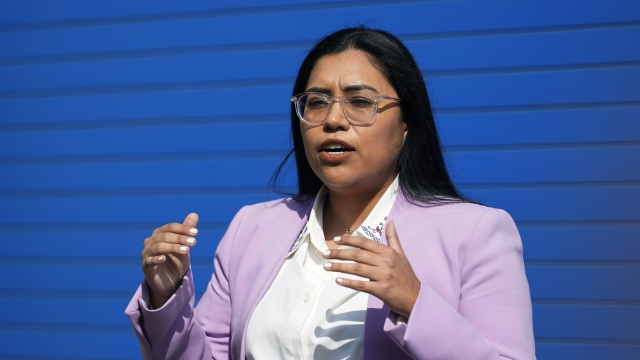 Texas' 28th Congressional District stretches from Laredo, to parts of Mission, Texas in the Rio Grande Valley and up to parts of San Antonio.

A run off on the Rio Grande — The 28th Texas Congressional District pits incumbent Henry Cuellar against challenger Jessica Cisneros.

Cuellar is fighting for his political life after not winning the March primary and still under a haze of scrutiny after FBI agents searched his home in January in connection with a larger corruption probe.

The 68-year-old Cuellar is a conservative Democrat, called the last anti-abortion rights member of his party. Cuellar has been keeping a low profile, except from time to time to chide the Biden administration on immigration.

"Unfortunately, they've been paying attention to activists and not the men and women in green and blue," he said.

Newsy reached out to Cuellar's campaign repeatedly for interviews, by phone, email and in person. There was no response to our requests.

Cisneros, who turns 29 on election day, has focused her campaign on immigration policy, abortion rights and helping working class voters in the district.

Progressives like New York Congresswoman Alexandria Ocasio-Cortez are backing Cisneros, as well Vermont Sen. Bernie Sanders, who joined her at a rally Friday.

"Jessica is running against a candidate who apparently believes that it is appropriate for the government at the federal, state, local level to tell every woman in this country what she can or cannot do with her body," Sanders said.

Voters supporting Cisneros say her stance on abortion is a big draw for their support.

"I'm really hoping will because we need people to really support and try to keep that, you know, as a right for women," San Antonio resident Candy Layser said.

Texas' 28th Congressional District stretches from Laredo, down the border, to parts of Mission, Texas in the Rio Grande Valley and up to parts of San Antonio. U.S. Census data says the district is more than three quarters Hispanic, a historic Democratic stronghold.

"There's definitely been movement towards believing a more progressive vision in the Democratic party is useful and maybe even attractive to a lot of voters," said University of Houston Political Science Professor Brandon Rottinghaus. "But there's still a lot of resistance to that because it's still a conservative place — ideologically conservative, religiously conservative, economically conservative. So these things are all contributing to the fact that it's been a really tense battle between these two coalitions."

Abortion could be a wedge issue that cements victory for Cuellar. Many active voters in the area are Catholics and against it.

Or it may be the issue that draws younger voters in support of Cisneros.

In the last two weeks, groups supporting Cuellar have carpet-bombed the airwaves with attack ads and sent blizzards of mailers. The most personal and blistering attack is on a billboard, dredging up gossip about Cisneros. The local county chair says the negative campaigning has been a shock.