African-American Voters Could Be Key to Success for 2020 Democrats 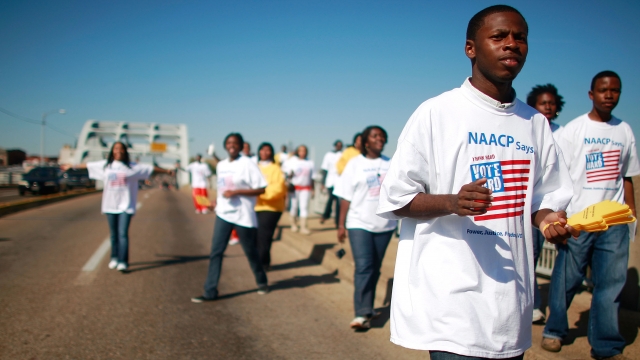 2020 presidential hopefuls will likely have to focus in on African-American voters to clinch the Democratic nomination.

Democratic presidential hopefuls are already hard at work trying to win over voters -- with a keen eye on one group that is expected to be pivotal in deciding the nominee.

African-American voters will likely play a key role in the 2020 Democrat primaries, especially in the south.

"So these are states with large African-American populations and racially partisan, polarized voting where most whites are going to vote in the Republican primary, which leaves African Americans as actually being a really pivotal role in the Democratic primary, said Andra Gillespie, who is a political scientist at Emory University and a fellow at the Joint Center for Political and Economic Studies.

Black voters accounted for 27 percent of 2016 Democratic primary votes by early June, the point when Hillary Clinton had established a firm lead for the nomination. And in 2020 their support will be crucial for any candidate to break through the crowded field. South Carolina, which had a 61% share of black Democratic voters in the primary, holds its contest early in the process, followed later by Super Tuesday -- when a number of states with high black voter populations will go to the polls.

Some candidates are already attempting to directly appeal to the voting block with targeted messages.

"Working families today face a lot tougher path than my family did, and families of color face a path that is steeper and rockier," said Massachusetts Senator Elizabeth Warren in a video announcing her plans to form a presidential explanatory committee.

African-American turnout was down during the 2016 general election signaling a major change is needed to turn out voters in 2020. Part of the reason for that low turnout was the 'Obama Effect' — the former president's ability to motivate black voters to turn out.

"So I think what needs to happen there is that we need to and look at 2016 and go and look at not just at candidate excitement or whether or not African Americans were as excited about Hillary Clinton as they were about Barack Obama," Gillespie said. "We also need to interrogate and investigate the effectiveness of the mobilization strategies that Clinton used, particularly with African-Americans and particularly in states that proved to be pivotal."