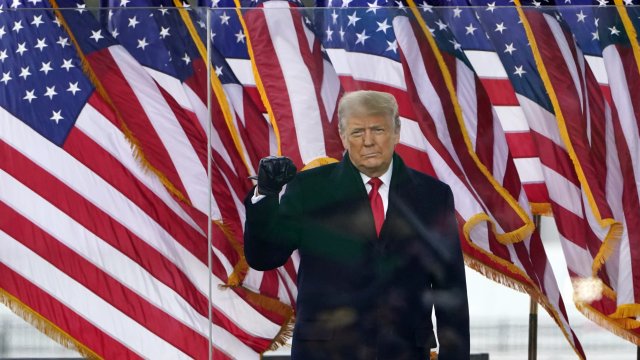 House Democrats are planning to introduce articles of impeachment against President Trump after supporters rioted inside the Capitol Wednesday.

House Speaker Nancy Pelosi is planning to try to impeach the president for the second time in a little more than a year if he does not resign or is not removed from office by his Cabinet. Democrats are already circulating sample articles of impeachment accusing him of inciting insurrection.

This comes after nearly half of lawmakers in Washington, mostly Democrats, have called for the president's resignation or removal from office. Democratic leadership has called on the vice president to act, but he isn’t expected to. Education Secretary Betsy DeVos reportedly resigned because he wouldn’t begin discussions.

Republican House Minority Leader Kevin McCarthy is not on board, saying in part, "Impeaching the president with just 12 days left in his term will only divide our country more." His view is echoed by virtually all House Republicans,  including Congressman Andy Harris, who spoke to Newsy.

"I's another sham, just like the last impeachment. We have 12 days away from inauguration. This makes no sense whatsoever. This is all for show," Harris said.

Harris, one of the Republicans who voted to reject some of President-elect Joe Biden's electoral victories, does not blame the president for inciting the riots. But if the House, with a slim Democratic majority, impeaches the president, it's not clear there will be enough Republican support in the Senate to remove him from office. Last February, one Republican senator, Mitt Romney of Utah, voted in favor of removal. Democrats would need at least 16 Republicans to join them this time. And Majority Leader Mitch McConnell would need to call the Senate back into session. Even Democrat Dick Durbin of Illinois says all of that is “unlikely.” Sen. Sherrod Brown of Ohio says he'd prefer the Cabinet remove him.

"One, it's faster. And second, it will be less partisan, because these are all or almost all Republicans in the Cabinet," he said.

Still, Brown is supportive of moving forward with impeachment if the Cabinet doesn't act.

"We began drafting right now the articles of impeachment and get them as soon as possible," he said. "I I don't know what the House is planning, but the sooner, the better. If we're going to do this, too, the Senate needs to come back. Literally the day of those articles are voted on and start, and start moving quickly."