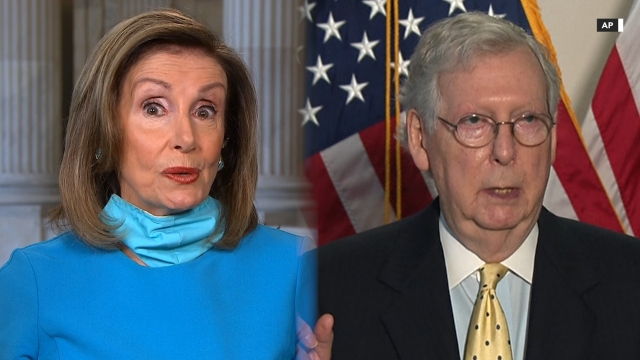 Both major parties are refusing to make concessions in order to reach a deal on a next-round COVID-19 relief bill.

Even with fewer members of Congress and staff during the coronavirus pandemic, the halls of Congress are typically bustling with activity.

But this week, most members are home while leadership remains at odds over a next round coronavirus relief package.

“The Democrats aren’t taking this as a serious issue,” Senate Majority Leader Mitch McConnell stated in prepared remarks on the Senate floor. “They aren’t acting like this is serious, and the American people are hurting in the meantime.”

Pelosi and McConnell are engaging in a near-daily war of words in a mostly cleared-out Capitol. But the pair haven’t met in private a single time this month, as many unemployed Americans will soon begin receiving federal unemployment, after President Trump signed several executive actions over the weekend.

The benefits, ranging from $300-400 per week, use federal funding provided through FEMA’s Disaster Mitigation Act of 2000. But money could reportedly run out in just six weeks.

At the Capitol, still no movement. No funding for state and local governments, no additional money for COVID-19 testing, and no extension of the popular Paycheck Protection Program, which expired over the weekend.

Instead, a stalemate — which can be traced back to the top of both major parties.