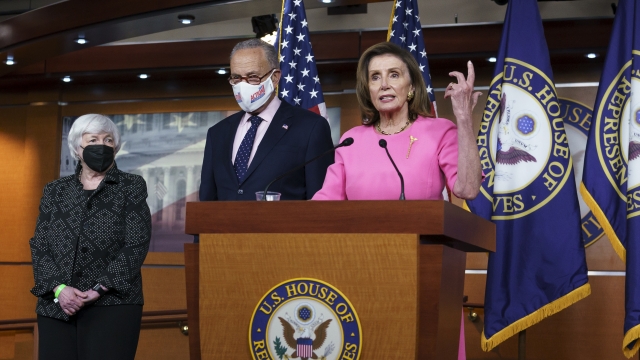 Democrats have proposed paying for the measure mostly with tax increases on the rich and corporations, but lawmakers have disagreed over the details.

The White House and congressional Democrats have agreed to a “framework" to pay for their huge, emerging social and environment bill, top Democrats said Thursday, but they offered no details and the significance was unclear.

Senate Majority Leader Chuck Schumer of New York and House Speaker Nancy Pelosi of California announced the development as Biden administration officials and Democratic congressional leaders negotiated behind the scenes on the mammoth package of spending and tax initiatives.

The West Virginia Democrat will play a critical role in green energy policy despite having ties to the fossil fuel industry.

Democratic leaders and President Joe Biden have wanted the measure to total some $3.5 trillion over 10 years.

But the party has been divided over the final size and many of the details, and there has been no public word that agreements have been reached on any of those crucial questions.

Republicans are solidly opposed to the package, and Democrats will be able to push it through Congress only if they limit their defections to three House members and none in the Senate.

The statements by Schumer and Pelosi left unclear whether administration and congressional bargainers had made decisions actually paring down their options for financing the bill, or were simply working off a broad menu of options that had already existed.

Also unclear was whether the “framework" was a step toward resolving the myriad disputes between rank-and-file party moderates and progressives that have slowed work on the legislation, and there was no initial public indication that it had.

That bill incorporates much of President Biden’s domestic agenda. It includes a sweeping overhaul of federal taxes and spending to make what the president views as overdue investments in health care, family services and efforts to fight climate change.

The measure would impose tax hikes on corporations and wealthy Americans earning beyond $400,000 a year and plow that money back into federal programs for young and old, along with investments to tackle climate change.

Moderate Democrats, most prominently Sens. Joe Manchin of West Virginia and Kyrsten Sinema of Arizona, have demanded that the $3.5 trillion price tag be reduced.

Democrats have proposed paying for the measure mostly with tax increases on the rich and corporations. But lawmakers have disagreed over details of those levies, and other disputes remain over initiatives to boost health care, climate change and other proposals.

Despite disputes, many Democrats say they expect the final product to align with President Biden’s broader vision and eventually have robust party support, even if that version is adjusted or scaled back.