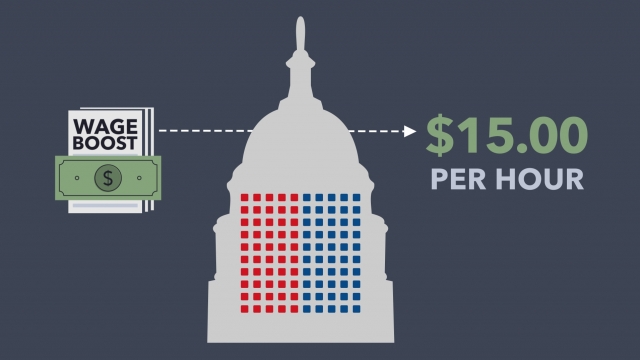 Democrats have long called for a $15 minimum wage, but an intraparty fight has cast doubts the proposal can survive an evenly divided Senate.

"It wouldn't just help me out," Adriana Alvarez, a Fight For $15 leader and McDonald's worker, told Newsy. "It would help out so many families."

With President Biden in the White House and Democratic control of the House and Senate, they're determined to make that a reality.

"The political process has for years been tilted in favor of the wealthy, but we have the moment right now to change that and we're seeing evidence of that in the initial action that the Biden administration has taken and in the new direction of the new Congress," explained Damon Silvers, the policy director at the American Federation of Labor and Congress of Industrial Organizations (AFL-CIO), which is made up of 55 national and international labor unions that represent 12.5 million working people.

Congress hasn't raised the federal minimum wage since 2007, making this the longest stretch without an increase since the minimum wage was established 80 years ago. In the meantime, the cost of living has gone up, while the minimum wage has fallen behind. During the pandemic, calls to raise it have grown more urgent.

"People have thought those survival checks we've sent out have been helpful but those are helpful for a short period of time," Rep. Mark Pocan, D-Wis., a vocal supporter for raising the minimum wage to $15 per hour, told Newsy. "What's going to be helpful in the long run is if they actually get something worth their time in that wage."

In his $1.9 trillion COVID-19 relief plan, the president included a wage hike, and that's expected to be included in the bill the House is trying to pass. In the Senate, the measure's inclusion is less clear.

"The labor movement is talking to all the members of Congress and to the Biden administration about how important it is to raise the minimum wage," said Silvers, the policy director at AFL-CIO.

Sen. Bernie Sanders of Vermont, a longtime advocate of raising the minimum wage, is pushing to include a $15 increase in the bill the Senate hopes to pass using "reconciliation" — an obscure budget procedure that allows legislation to pass with just a simple majority.

"If we can't get enough Republicans to vote for this legislation under regular order, we cannot simply take no for an answer," Sanders said last month at a virtual event introducing the Raise the Wage Act of 2021. "We must raise the minimum wage to $15 an hour through budget reconciliation."

It's unclear if a wage boost is even allowed through the reconciliation process. That decision lies with the Senate parliamentarian.

But the hurdles aren't just logistical — they're also political. Even if the parliamentarian approves the wage hike, Democrats may not all be on board — with Sens. Kyrsten Sinema of Arizona and Joe Manchin of West Virginia against the move. Given the Democrats' slim majority in the Senate, raising the minimum wage to $15 an hour would require every Senate Democrat to vote in favor of it and for Vice President Kamala Harris to serve as the tie breaker.

President Biden cast doubt the provision will make it through Congress using reconciliation.

"I put it in, but I don't think it's going to survive," the president said earlier this month in an interview with CBS News.

He said the wage increase could turn into a "separate negotiation" from the relief package. It's unclear when those discussions might happen, and the White House did not respond to Newsy's requests for comment.

If Democrats can’t pass a wage hike with reconciliation, they can push for it in a standalone bill, but that avenue would require Republican support.

And activists, low-wage workers and national union leaders are pressuring Congress and the White House to act.

"We're labeled as essential. I think it's time that we're treated as essential workers and paid a livable wage," said Alvarez, the Fight for $15 leader and McDonald's employee. "This is the time to keep pushing and not give up."