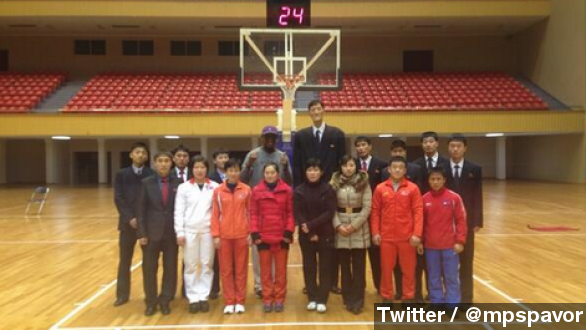 He’s back from his third trip to North Korea, and this time Dennis Rodman left without seeing his good friend, Kim Jong Un.

He’s back from his third trip to North Korea, and this time Dennis Rodman left without seeing his good friend, Kim Jong Un.

“People need to understand that it was not important for me to meet him every time I come, because he has another greater job to do for his country and I respect that.” (Via MSNBC)

Rodman was in the country  this time to train the North Korean basketball team for a game to be held on Kim’s birthday next month. (Via VICE)

Photos from the Worm’s trip to the reclusive country are few and far between, but thanks to the tweets of a Canadian business consultant there to assist Rodman, we have a bit more insight.

He apparently rode a horse …  visited a water park ... and hung out with some archery players. As for what he didn't do? (Via Twitter / @mpsavor)

In all likelihood, there was no discussion of the detention of Korean-American missionary Kenneth Bae. (Via CBS)

While Rodman did call on his buddy to “do him a solid and cut Kenneth Bae loose” back in May. (Via Twitter / @dennisrodman)

In recent months, Rodman’s made clear to reporters he’s no diplomat — just a basketball fan and a friend of Kim’s. (Via CNN)

A very useful friend, according former White House Asia advisor Victor Cha, who told The Daily Beast: “Kim Jong Un couldn’t get this sort of western media attention if he just gave a speech. It’s clearly a propaganda victory for him.”

Rodman’s latest trip to North Korea came less than two weeks after the man he calls his friend for life had his uncle denounced as human scum and executed.