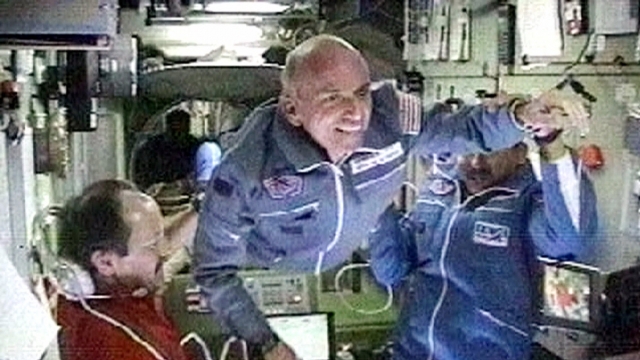 Businessman Dennis Tito became the world's first space tourist in 2001, when he launched to the International Space Station on a Russian rocket.

“It was the most euphoric period of my life. I enjoyed every minute of it.”

American businessman Dennis Tito became the world’s first space tourist on April 28, 2001, when he launched to the International Space Station on a Russian rocket.

It was a lifelong dream come true for the space enthusiast, who had once worked as an engineer at NASA's Jet Propulsion Laboratory.

NASA wasn’t willing to send private citizens into space after the Challenger explosion in 1986, so Tito turned to Russia, which was in need of money after the Cold War.

Tito: “It wasn’t just a matter of having the financial resources to make it happen. It was a matter that I was willing to train hard and work hard.”

Russia ultimately agreed — to the tune of $20 million. And Tito spent eight months training outside Moscow for his historic flight.

Tito: "We had a lot of classroom training, language training, which I zeroed out on, totally flunked that. But that was not fun at all. But there was physical training and various spinning chairs and weightlessness flights."

Tito: “I had my favorite porthole that I would look at and it looked down at the Earth, so I took a lot of pictures of the Earth. …  One of the Russian cosmonauts really liked to sing – really good singer, liked to sing Beatles songs. So we were just dancing in space.”

Six other space tourists have since flown into orbit. And now companies like Blue Origin, Virgin Galactic and SpaceX are banking on commercial spaceflights being the next big thing.

But Tito doesn’t like to focus on the fact that he pioneered space tourism as we know it today.

“The only reason I was the first is probably because I felt I was running out of time at age 60. And I better make it happen, not because, well, I want to be the first. ... My goal was to really experience being in space and ... it was the greatest eight days of my life.”