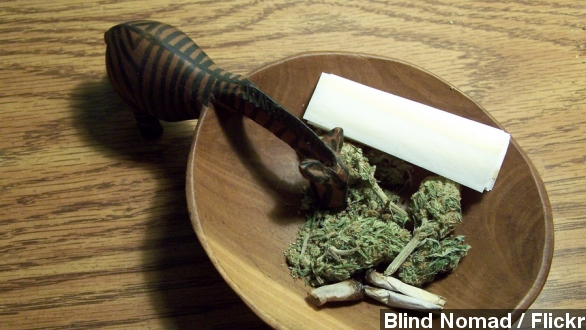 The Denver Post has named a &quot;marijuana editor&quot; to cover pot-related stories. The drug will be legalized in Colorado starting in January 2014.

News, sports, weather and all the marijuana info you could ever need. With weed legal in Colorado starting next month, The Denver Post has appointed a marijuana editor.

This is Ricardo Baca, Post's former entertainment editor and music critic and the paper's new marijuana editor. He's been with the Post for 12 years. Baca says he's never been a "full-on stoner," but has partaken of marijuana in the past.

In a memo sent to staffers after the hire, the Post's news director Kevin Dale called marijuana the paper's biggest story in the coming year.

Last year, Colorado and Washington became the first states to vote in favor of legalizing marijuana. Later, the federal government decided it would not fight the vote, even though using marijuana for non-health purposes is illegal under federal law. Colorado will begin allowing and taxing the drug at the beginning of January. (Via ABC)

But how do you cover a drug when your workplace has a "no drugs" policy for its employees? Well, the paper's VP of Human Resources says "smoke responsibly."

"As with alcohol, you are not allowed to ingest (either via cigarettes or food) marijuana in the office or come to the office 'reeking' of marijuana. If you do imbibe marijuana in the course of covering it for your job, we expect you to take necessary steps to ensure you do not drive while impaired or put anyone at risk." (Via Complex)

The Denver Post says it's also looking to hire a freelance pot critic, a freelance pot advice columnist, and a freelance video game writer in an effort to cover "cannabis culture and news from a professional, journalistic" point of view.