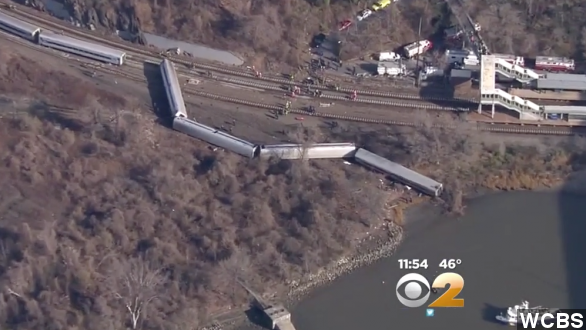 In a press conference Monday, investigators announced the train was going 82 mph as it approached a 30 mph zone.

​Just one day after a New York train derailment killed four and injured more than 60, details about the moments before the crash are beginning to come to light.

“From the event recorders, it shows that the train was travelling at approximately 82 mph as it went into a 30 mph curve.” (Via WHAM)

That was National Transit Security Board member Earl Weener, revealing at a press conference Monday that the Metro-North train 8808 was traveling at more than double the recommended safe speed when it entered the curve. (Via WCBS)

“For a train to be going 82 mph around that curve is just a frightening thought.” (Via YNN)

Weener added that the train’s throttle wasn’t put into the idle position until six seconds prior to the crash — the brakes not fully applied until five seconds prior, which Weener describes as “very late in the game.” (Via NPR)

But despite the new details, which were gathered from two black box recorders recovered at the scene, investigators aren’t ready to place blame.

And the train’s conductor has already placed the blame elsewhere — on the brakes.

"Rockefeller told investigators he tried to apply the brakes to slow the train before that curve but the brakes failed." (Via WNBC)

But some think that might not add up, as the train had reportedly already made nine stops prior to the derailment with no reported brake problems. (Via Fox News)

Still, trains have had issues at that particular curve before.

Back in July a freight train derailed in the same spot. (Via YouTube / VIDEOLANDMARKS)

The Los Angeles Times reports, this is the first accident in the company’s 30-year-history to cause deaths.

Investigators have reportedly confiscated the conductor’s cell phone, which they plan to check for activity prior to the crash. They also plan to interview the conductor and run a toxicology report. (Via New York Daily News)

That's despite reports he did not seem intoxicated following the crash.

Approximately 150 people were on board when all seven passenger cars jumped the tracks. The NTSB says it will take seven to 10 days to complete their investigation. (Via BBC)