Derrick Rose Likely Out For Season After Knee Surgery 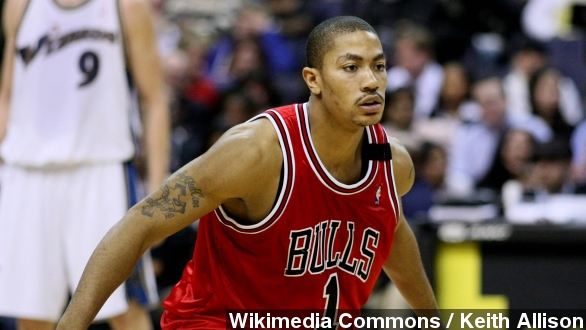 Rose underwent surgery Monday to reattach the torn medial meniscus in his right knee. He will likely be out four to six months.

It’s a sad case of deja vu for Chicago Bulls fans as star player Derrick Rose will reportedly miss the rest of the season following another knee injury.

According to team sources, the 25-year-old point guard underwent surgery Monday to reattach the torn medial meniscus in his right knee and now will likely be out four to six months, likely ending his season.

The injury came on this play Friday against the Portland Trailblazers, when Rose appeared to tweak his knee while turning up court to get back on defense. He later limped off the floor and eventually left the locker room on crutches.

The surgery was performed by team physician Brian Cole at Chicago’s Rush University Medical Center — where it appears he chose one potential treatment over another.

As Yahoo! Sports notes there are typically two options for repairing a torn meniscus: either completely removing the meniscus, which can put a player back on the court in a matter of weeks, or reattaching it, which can leave a player sidelined for months.

Judging by the timeline it appears Rose’s doctor went with the latter. And according to a surgeon at New York’s Mount Sinai Hospital, probably with good reason.

Quoted by USA Today she said, "If you remove part of the meniscus, you're taking that cushion out and down the road, you can develop arthritis … You want to save what's there. My guess is that you want to prolong the longevity of the career."

Of course, this is all too familiar for Bulls fans. Rose missed the entirety of the 2012-2013 season after tearing the ACL in his left knee late in the previous season.

But there is hope for players with this kind of injury. Fellow superstar point guards Russell Westbrook and Chris Paul have both undergone meniscus surgery with no apparent long-term drop in performance.

Rose is currently signed to a 5-year deal with the Bulls worth nearly $95 million.