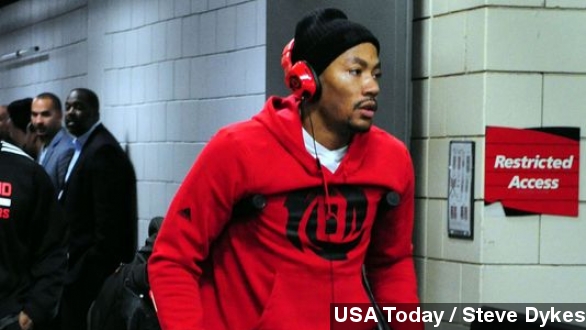 The Chicago Bulls guard left the visiting team's locker room in Portland Friday night on crutches after tearing his right meniscus on a non-contact play during a 98-95 loss to the Trailblazers. A USA Today writer says Rose could be out indefinitely, while one sports trainer speculates he could be out four to six months. Either way, it doesn't look good. (Via USA Today, Twitter / @ATTACKATHLETICS)

A writer for Yahoo! says: "If Rose decides to reattach the meniscus – usually the route taken by young players – he's expected to miss the rest of the regular season. To clip off the meniscus is a riskier long-term issue, but could have Rose back in one to two months."

Rose pivoted to turn upcourt after a Blazers steal in the third quarter when his knee buckled. He then limped to the Bulls' sideline and didn't return to the game. (Via ESPN)

The initial fear was that Rose tore his ACL, which, in the sports world, is a nearly season-ending injury. (Via Deadspin)

This unfortunate news comes on the heels of a highly anticipated comeback for the Chicago Bulls guard.

Rose missed the entire 2012-2013 season after going down with a torn ACL on his left knee. He underwent surgery, and Adidas later led a comeback campaign with the hashtag "thereturn" in anticipation of Rose's first game back. (Via Adidas)

Rose is expected to undergo surgery to repair the cartilage.