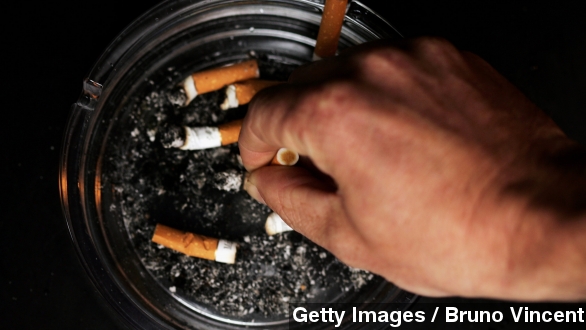 A new study by the American Cancer Society found smoking is causing the same percentage of cancer deaths it was 30 years ago.

Despite public information campaigns and declining smoking rates, a study by the American Cancer Society found cigarettes continue to cause about 30 percent of all cancer-related deaths in the country.

The study found about three out of 10 cancer-related deaths are caused by smoking. A study done 30 years ago came to similar conclusions. (Video via CNN)

To get this stat, researchers looked at 2010 National Health Interview Survey data on smoking rates and the portion of cancer deaths caused by smoking.

Although smoking has gone down in the past 30 years, new cancers have been added to the list of cancers that can cause death from smoking, possibly keeping the percentage the same.

The Centers for Disease Control and Prevention lists 12 cancers that can be directly caused by smoking in adults 35 years of age and older. They include stomach, liver and kidney cancers.

In 2012, the CDC estimated a little more than 18 percent of the adult American population smoked cigarettes. Study authors say although it is a good sign smoking is declining, this study proves continued work needs to be done to protect public health.

The authors also noted the estimates do not include potential cancer deaths from other types of tobacco like cigars, pipes or smokeless tobacco.

Cigarettes are the leading cause of preventable death in the U.S. and kill more than 480,000 Americans a year.