DHS Asks For Authority To Send Some Migrant Children Back Home 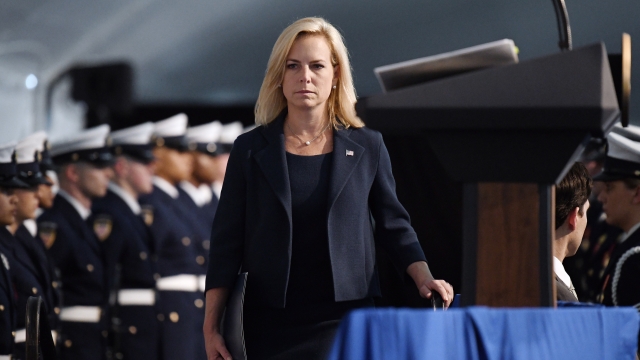 Border agents had more than 1,200 unaccompanied migrant children in their care as of Thursday.

In a letter to lawmakers Thursday, Nielsen said she'll be requesting legal changes be made to allow U.S. officials to detain migrant families together until their asylum claims are processed. She also asked for the authority to deport unaccompanied migrant children back to their home countries more quickly "if they have no legal right to stay."

Under current law, an unaccompanied migrant child who arrives in the U.S. from a noncontiguous country is transferred over to the Department of Health and Human Services. HHS officials then attempt to find a relative or sponsor in the U.S. to unite the child with.

Nielsen's letter came one day after U.S. Customs and Border Protection Commission Kevin McAleenan said his agency was on track to apprehend more than 100,000 migrants in March — that would be the largest number of monthly arrests in more than a decade.

The high number of apprehensions is causing overcrowding issues at processing centers, which just aren't built to hold that many people. In her letter, Nielsen said border agents currently had more than 1,200 unaccompanied migrant children in their care.

She predicted that HHS "will very likely require thousands of additional beds in the coming weeks and months" in order to accommodate the growing influx of children.