'Complicit' Is Your Dictionary.com Word Of The Year 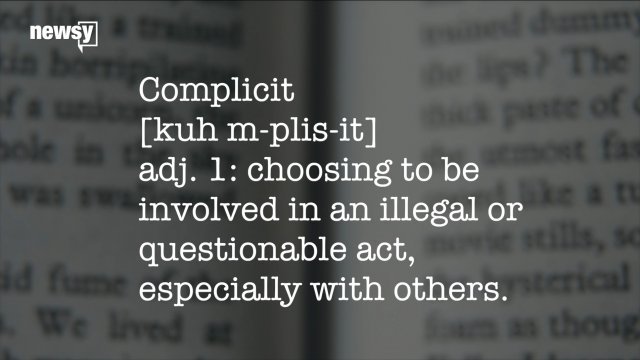 Dictionary.com is summing up 2017 with the word 'complicit,' citing Ivanka Trump and other figures in the news.

Complicit. The word means getting involved in shady business, and it's how Dictionary.com chose to sum up 2017's most meaningful events.

The site says it picked "complicit" to represent "those who speak out against powerful figures and institutions and about those who stay silent." The dictionary's main target? Ivanka Trump.

The dictionary says it saw two big spikes in users looking up "complicit" this year: one after "Saturday Night Live" skewered Trump's role in the White House with the word, and another after she was interviewed on "CBS This Morning."

This Dictionary Now Has An Official Definition For The Eggplant Emoji

Dictionary.com is the first dictionary to include published summaries for emoji.

In that interview, Trump told CBS, "I don't know what it means to be 'complicit.'"

But it's not all Ivanka: Dictionary.com noted the recent sexual harassment scandals plaguing Hollywood, the media and politics also exposed the complicit behavior of those who turned a blind eye to these allegations.

Dictionary.com also branded social media companies complicit in the Russian propaganda that used their platforms to attempt to meddle in the 2016 presidential election.

But 2017 wasn't all about keeping quiet: The dictionary says one surge in "complicit" lookups came after Sen. Jeff Flake's announcement that he was retiring from Congress.

Flake said, "It is time for our complicity and our accommodation of the unacceptable to end."