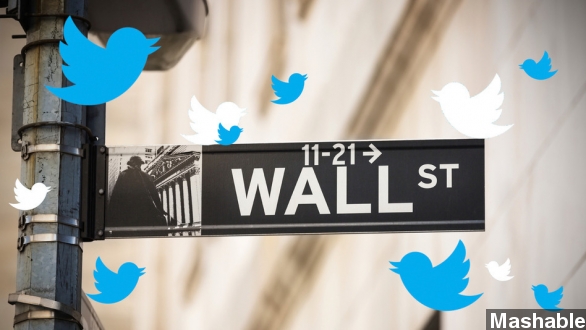 Twitter's IPO went without a hitch, unlike its competitor Facebook, except for one alleged mistake: According to The Wall Street Journal, some of the company's underwriters selectively disclosed growth and revenue information to certain investors.

The Journal broke the news a day before Twitter's offering, which took Wall Street by storm Thursday morning. The outlet reports some private analysts told select investors Twitter's revenue growth would not be as fast as expected, creating a huge information gap among investors. (Via The Wall Street Journal)

In the most basic terms, while some of Wall Street's investment firms were estimating Twitter's growth at 80 percent next year and 58 percent the following year, the IPO's underwriters — Goldman Sachs, Morgan Stanley, JPMorgan Chase & Co., Merrill Lynch and Deutsche Bank AG — were reportedly telling clients to expect a much slower growth rate, influencing their investments. (Via YouTube / Twitter, Bloomberg)

Now, stock-savvy people know that over-hyping an investment is bad. It was largely responsible for the dot-com boom and bust of the late '90s. But under-hyping can be just as bad. Just ask Facebook.

By the time the IPO rolled around, higher-profile clients had gotten a peek at the potential profitability problems with Facebook, while everyone else was being whipped into a frenzy — a move many called unfair to the average person. (Via The Atlantic)

And when it comes to the rules of the Securities and Exchange Commission, you either tell everyone or tell no one.

Morgan Stanley eventually had to pay $5 million to the commonwealth of Massachusetts for its role in the selective disclosures. And Facebook and its underwriters are still looking down the barrels of several class-action lawsuits. (Via WBZ-TV)

Did Twitter learn nothing? Are we doomed to be duped by Wall Street forever? How can this happen twice? By doing some good old-fashioned research, of course.

According to Gawker's Valleywag, Twitter took advantage of a little-known provision in the JOBS Act passed last year to file a "secret IPO" that allowed the company to skirt past amending its filings in the public and disconcerting way Facebook did before its IPO.

But all hope is not lost. There's another, even lesser-known provision in the JOBS Act that could close the information gap between Wall Street and the everyday investor. But it works kind of like a game of chicken. (Via YouTube / StockMarketCoach)

"The JOBS Act specifically allows analysts to pick up coverage of a company before it goes IPO, even if they work for one of the underwriters. ... Once an analyst picks up coverage they have to publish their research for everyone to see. That could be why none of the big Wall Street firms have taken advantage of this provision in the JOBS Act." (Via CNN)