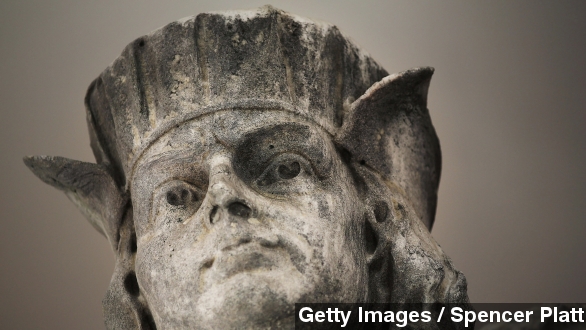 A new study claims to have found evidence of syphilis in the Old World before Columbus' voyage to the Americas, reopening an old debate.

In 1492, Columbus sailed the ocean blue. And in 1495, the first recorded mass outbreak of syphilis in Europe infected many people and left few alive. Coincidence, or is there a connection here?

The origins of syphilis in the Old World have been a controversial subject for many years, but the prevailing theory holds the venereal disease hitched a ride to Europe from the Americas in the bodies of some early explorers.

As one History Channel host said, "Some scientists believe it was a disease introduced to the continent by none other than Christopher Columbus after his voyage to the New World."

But that theory has its critics, including the authors of a new study which claim the disease was always present in Europe and just wasn't diagnosed properly until the 1495 outbreak. Their evidence? Bones.

Syphilis is one of the few diseases that can leave physical scars on the skeletons of its victims. Researchers at Croatia's University of Split analyzed 403 skeletons from various eras for syphilitic marks.

Their findings, published Thursday in The Journal of Sexual Medicine, record one syphilitic skeleton from the 2nd to 6th century — well before Columbus's voyage.

The study's authors suggest the Columbus theory of syphilis needs to be rethought in light of their discovery, but the theory's proponents aren't willing to let it unravel over one skeleton.

After all, other skeletons with bone scarring have been held up as evidence of syphilis in pre-colonial Europe before. But a comprehensive study published in 2011 discarded those examples as inconclusive.

One researcher told HealthDay this new skeleton is no different; the researchers findings "actually suggest a kind of abnormal bone growth" rather than syphilis.