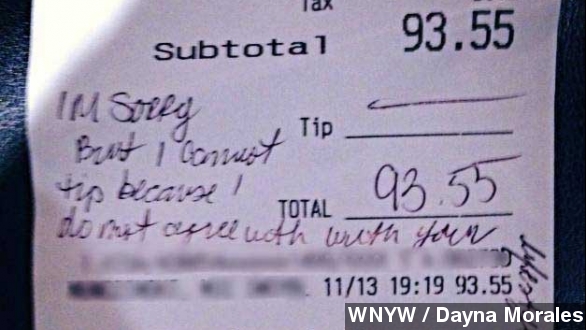 A family says not only did it not leave an anti-gay note for their server, as she claimed, but a tip was also left.

Remember the gay waitress who says she was stiffed on a tip due to her "lifestyle?" Well, now the validity of her story is being brought into question.

New Jersey server Dayna Morales says she was denied a tip by patrons who also left a nasty note on the check reading, "I'm sorry but I cannot tip because I do not agree with your lifestyle and how you live your life." (Via WNYW)

The story gained national attention, and donations for the waitress came in from all over the world. But now a family claiming to be the patrons in question say they never wrote that note — and they did tip Morales.

In an exclusive interview with New York's WNBC, the family, who wished to remain anonymous, showed their customer copy of the receipt and provided their bank statement — matching the amount of the meal plus an $18 tip.

"They said it's possible you made this up because this isn't their handwriting and this isn't how they left their check."

"That's not my handwriting. I don't know."

The family tells WNBC it could all be a miscommunication. They claim they were told their server's name was going to be "Dan" and not "Dayna," so they called her "Dan" originally. But, as members of the Today Show point out, it's a very tricky situation.

"Maybe a third party came in and took the tip."

"But, here's the deal guys, the tip is included on their credit card charge. So, either someone fraudulently added money to their charge or it was there." (Via NBC)

Morales, a former Marine, says she never mentioned she was gay to the table she was serving, and all the money she's received from well-wishers is being donated to the Wounded Warrior Foundation.