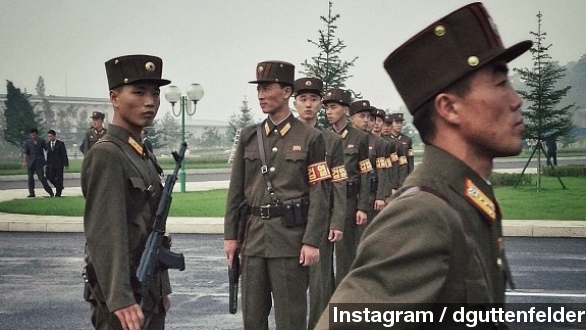 If true, it could be Kim Jong-un’s most brutal act yet.

South Korea’s largest newspaper describes one of the executions: "Eight people -- their heads covered with white bags -- were tied to stakes at a local stadium in the city of Wonsan, before authorities shot them with a machine gun. Wonsan authorities gathered a crowd of 10,000 people, and forced them to watch the killings." (Via Joongang Ilbo)

The relatives of the executed were reportedly sent to prison camps — a tactic often used to punish those perceived guilty by association. (Via VICE)

​North Korean law permits executions for those accused of conspiring to overthrow the government or commit treason. But according to the paper, the recent executions were for minor offenses like possessing bibles and watching South Korean soap operas. (Via ITN)

The Bibles are a problem because North Koreans are forced to follow Juche ideology — basically a mix of Marxism and worship of the Kim dynasty. Despite this, an estimated 100,000 North Koreans practice Christianity illegally. (Via National Geographic)

As for the soap operas, TVs in North Korea are preset to only get government-approved channels and are sealed to prevent tampering — but many foreign DVDs are smuggled in anyway. (Via MBC)

This report comes about three months after Kim reportedly ordered to death by firing squad a dozen or so performers, including his ex-girlfriend. (Via Euronews)

Observers say the alleged executions may have something to do with what’s seen as a rising wave of discontent in North Korea. (Via The Telegraph)

Predictably, no word from North Korean government on any of the recent allegations.