Did Parts Of The Republican National Convention Violate The Hatch Act? 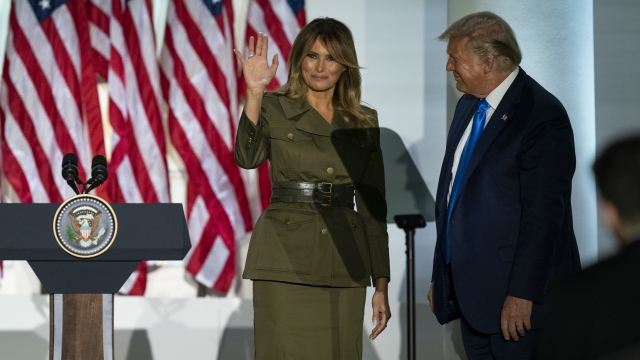 Critics complained about the president and first lady speaking from the White House grounds. But a federal agency said those speeches are ok.

President Trump and the Republican National Committee have been criticized for blurring the line between official government events and partisan politics.

The concerns stem from a handful of segments airing during the prime-time coverage of the 2020 Republican National Convention: a presidential pardon, a naturalization ceremony, remarks from the current Secretary of State, and other speeches from the White House grounds.

The law at issue is the Hatch Act, which prohibits executive branch employees from using their positions to influence a partisan political election. But the law is not an outright ban on all political activity.

"So the intent of the Hatch Act was never to make it so that executive branch employees can never engage in any kind of political activity, because that's one of our First Amendment rights. And so I think the drafters are very careful not to cross that line," said Rebecca Jones, the policy counsel at the Project on Government Oversight.

Secretary of State Mike Pompeo's recorded speech from Jerusalem is raising some of the biggest red flags. Rep. Joaquin Castro, a Democrat who sits on the House Foreign Affairs Committee, has already launched an investigation. But John Hudak from the Brookings Institution said he does not think Pompeo broke the law.

"He certainly skirted it. He certainly violated norms within the United States that the primary norm being that the Secretary of State does not participate in political conventions. But ultimately, he identified himself as Mike Pompeo," said Hudak, a senior fellow with the Brookings Institution.

"I have a big job… as Susan’s husband and Nick’s Dad!" said Pompeo.

As for the presidential pardon and naturalization ceremony, a White House official told Newsy those were both official events that were publicly shared ahead of the prime-time broadcast: "The campaign decided to use the publicly available content for campaign purposes. There was no violation of law." The Hatch Act doesn't apply to the president or vice president, but experts say the naturalization ceremony and the involvement of acting Homeland Security Secretary Chad Wolf is still a gray area.

"It's still worth investigating given that Mr. Wolf is a political appointee and is very much subject to the Hatch Act. And so it'll really just depend on what the motivation for the event was. And again, how it was funded," said Jones.

Then, there's the speeches from the president and first lady, and the setup required for those to happen at the White House.

"The concern, however, are the employees of the White House who have to engage in readying that event as part of their job. ... That is why presidents historically and uniformly have avoided using the White House as part of party conventions," said Hudak.

But the Office of Special Council, which is responsible for investigating and enforcing the Hatch Act, cleared those concerns. In a statement Wednesday, the OSC said the Hatch Act does not apply to the White House Rose Garden or South Lawn.