Digital Rights Group To Google: The Kids Are Not All Right To Track 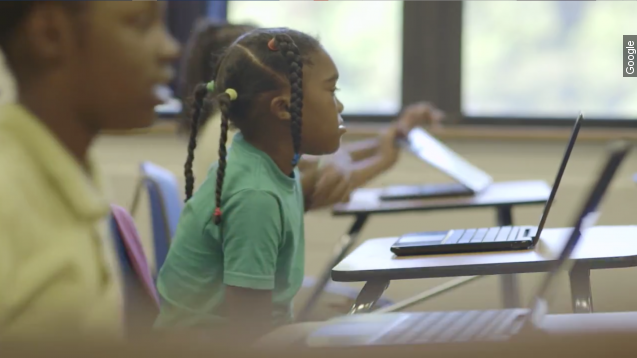 Mass data collection is one of those things people tend to frown upon. So, when Google signed a pledge to safeguard students' data, Americans were happy. (Video via Google)

But now the Electronic Frontier Foundation is accusing the company of "collecting and data mining school children's personal information."

The EFF filed a complaint against Google with the FTC Tuesday, saying it has been collecting the data of students as young as seven years old. (Video via Google)

While looking into Google's tools for education — used by more than 50 million students in the U.S. — the foundation said Google's "Sync" feature on Chrome raised a red flag. (Video via Google)

The tool is enabled by default.The EFF says Google can track and store "records of every Internet site students visit, every search term they use, the results they click on, videos they look for and watch on YouTube, and their saved passwords."

Even though the EFF says Google doesn't use the data for targeted advertising, which is in compliance with the Student Privacy Pledge, the issue seems to be that Google could be collecting any data at all. (Video via Google)

Online, the company explains, "Google Apps for Education users own their data, not Google." And also says, "We only keep your data as long as schools require us to keep it." (Video via Google)

Google has already made a statement saying it's confident its tools "comply with both the law and (its) promises, including the Student Privacy Pledge." (Video via Google)

Now it's up to the FTC to decide whether or not to investigate the EFF's accusation. (Video via Google)