Disaster Relief Might Demand A New Approach To Aid From Congress 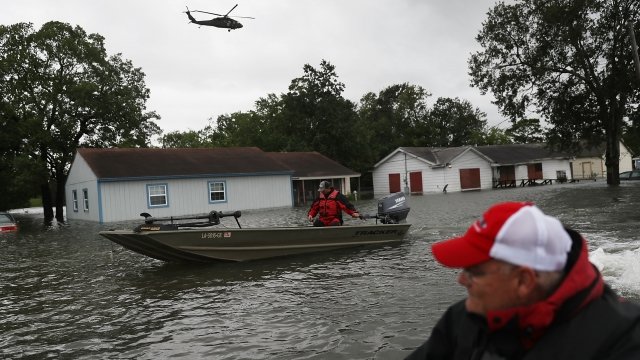 And one congressman is hoping to help make that change.

Louisiana Congressman Garret Graves is on a mission to fix how the government plans for disasters like Hurricane Harvey. Currently, Congress takes a reactionary approach to natural disasters: It draws up a disaster relief bill, the president signs it and we all kind of move on to the next fight.

When those disaster relief bills are emergency spending, they don't count against the federal deficit, which makes it an easier sell. On the flip side, investment in pre-protection has to go through the normal budget cycle.

In 2005, Hurricane Katrina decimated the gulf. Graves headed up Louisiana's restoration efforts and took the lessons learned from Katrina so the state could protect itself. That's something he says the federal government is behind on.

"It's one of those issues that you have to get people's attention and focus. In the case of Louisiana, we are certainly surrounded by water, we live in water. Helping other members of Congress who may not have such an intimate of a role or a relationship with the water around your community is one of the challenges we have," Graves said.

What Graves helped his state do after Katrina has become the model for other states on the coast. And he thinks some of that thinking could work nationally.

Officials say more than 13,000 people have been rescued from Harvey in and around Houston.

"You have to recognize there's more than one tool in your tool belt. There's no silver bullet solution, you have to tailor the solutions to your area. In Lousiana and many other areas, you have the ability to use green infrastructure of wetlands and dunes and coastal forests and things like that," Graves said.

To be successful, Graves would need to change the way lawmakers think — a feat that seems to be increasingly difficult as all sides become more polarized.