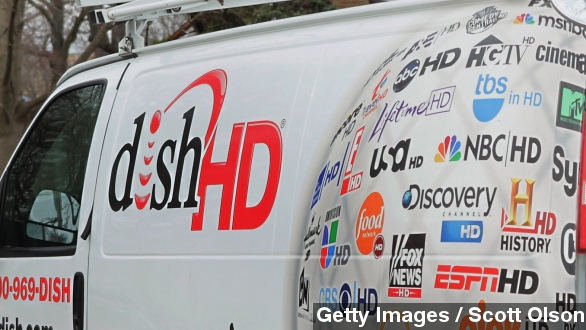 Dish Network customers will be without Fox News and Fox Business for an indefinite amount of time as the two sides continue a heated contract debate. The feeds went down Saturday night after Dish Network and Fox executives couldn't agree on a new contract.

And, not surprisingly, both sides are pointing fingers.

The Dish Network VP of programming said in a statement, "It's like we're about to close on a house and the realtor is trying to make us buy a new car as well."

But Fox executives say Dish Network isn't agreeing to terms that plenty of other distributors are paying for, while CNET quotes Fox News' VP of distribution as accusing Dish of using its viewers as "pawns."

While the companies are fighting over sports and entertainment discrepancies, the blackout only affects Fox News and Fox Business channels.

But it's the third high-profile contract dispute for Dish Network in the last few weeks.

Turner Broadcasting, including CNN, went black and then returned to Dish Network about a month ago, while CBS' long-fought dispute with Dish resulted in about a 12-hour blackout of channels. The two agreed to a deal shortly thereafter.

Fox News execs are calling for customers to switch providers — but CNN's Brian Stelter points out that doesn't mean this dispute is unusually venomous.

Stelter writes: "Encouraging viewers to switch providers is a common channel owner tactic. ... If history is any guide, Fox ... wants Dish to accept higher rates for Fox News and restore the channel as soon as possible."

The channels are expected to remain dark until the two sides reach a deal.