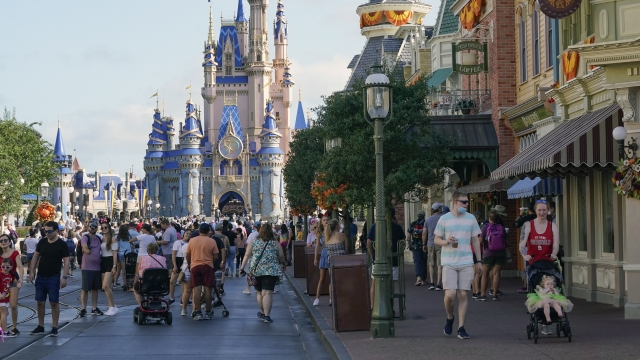 The company on Wednesday reported a net income of $1.15B in the three months through Jan.1, compared with just $17M in fiscal Q1 the year before.

A theme-park comeback continued to boost Disney's results in the most recent quarter. The company also added more subscribers to its Disney+ streaming service than analysts expected.

Disney had closed or limited capacity at its theme parks and suspended cruises earlier in the pandemic. Domestic parks have reopened, and revenue in that division doubled in the most recent quarter, to $7.23 billion, while profit came to $2.45 billion from a year-ago loss of $119 million, even as the omicron variant suppressed some people's travel plans COVID-19 restrictions continued to affect some international operations.

One streaming analyst said the demand for children's content surged 58% between the start of 2020 and the fall of 2021.

Burbank, California-based Disney on Wednesday reported net income of $1.15 billion in the three months through Jan. 1, compared with $17 million in the fiscal first quarter the year before.

Disney's streaming business is its top priority as cord-cutting reduces the viewing universe for traditional TV networks. Investors have closely followed the trajectory of Disney+, which quickly picked up big subscriber numbers after launching in November 2019. Growth had lagged recently, and some analysts had warned that Disney+ could miss its target of 230 million to 260 million subscribers by 2024.

But the subscriber gain topped expectations even as growth at rival Netflix disappointed, logging 129.8 million Disney+ subscribers, up 37% from the previous year, 11.8 million higher than the previous quarter and greater than analysts’ forecast of 125.4 million. Disney backed its 2024 forecast.

Analysts at Parks Associates found that the top five platforms of the year were Netflix, Amazon Prime Video, Disney+, Hulu and HBO Max.

While streaming is the company's focus, Disney's networks business still brings in plenty of cash. The division housing ABC, ESPN and FX made $1.5 billion in profit in the most recent quarter, down 13% from the year before, as production and marketing costs increased.