Why Disney's Special District Is Harder To Dissolve Than It Seems 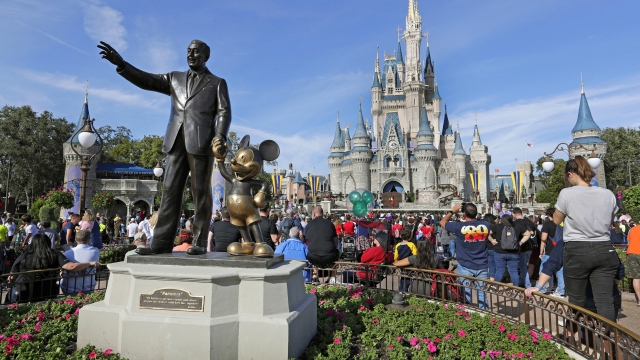 Florida Gov. Ron DeSantis signed a bill to dissolve a Disney special district, but now many wonder what this means for future debts and taxes.

In the latest political battle brewing in Florida, Gov. Ron DeSantis signed a bill revoking the Walt Disney Company's special district status, and he didn't waste time — it was signed just days after the legislation was introduced in late April.

The bill is widely seen as retaliation for the company taking an official stance against the governor's so-called "Don't Say Gay Bill."

"But then for Disney to come out and put a statement and say the bill should have never passed and that they are going to actively work to repeal it, I think, one: was fundamentally dishonest, but two: I think that crossed a line," DeSantis said.

But the bill has brought up questions about what exactly happens when a special district suddenly dissolves. Although there isn't a good precedent for this, a number of legal experts have suggested this may end up backfiring for the governor.

To explain why, let's go back to how this all started.

Walt Disney first began buying up marshland in Central Florida in the 1960s. The company quietly bought the acres through shell corporations and cash transactions, because if news broke that Disney was making a park, the price of land would skyrocket. By the time the secret got out, Walt Disney was meeting with legislators and business leaders to secure tax breaks, other benefits, and of course, the special district status.

In 1967, Disney got the state to approve of the Reedy Creek Improvement District, and the agreement was made "in perpetuity." Disney would still pay its state and federal taxes, but it would also fund and run its own government of Reedy Creek. It did that by levying its own taxes to pay for services like power, water, roads and fire protection as they built the parks.

And that continues today: Tax revenue from Disney properties fund Reedy Creek's services like waste management and recycling or its own emergency services.

A key part of this structure is that the government can issue its own municipal bonds to pay for infrastructure projects. They're essentially loans from Disney's many investors, and because municipal bonds are usually exempt from federal taxes, they're often cheaper to borrow. And Disney is continually paying some back: $60 million of the district's $170 million budget last year went to debt payments on bonds that were issued to fund projects like roads and a pedestrian bridge.

It's worth noting there are actually tens of thousands of special districts in the country. Disney is unusual because it's the only taxpayer in the entire district, and Disney is the largest employer in a state that is pretty dependent on tourism. It wields a unique "Walt Disney World is the economic engine that drives Central Florida and indeed much of Florida's tourism business," Lori Rozsa, reporter with the Washington Post, said. "Walt Disney World has been a huge influencer of politics in Florida since its inception, clearly since they got this treatment that they were able to get pretty much what they wanted from the legislature. A lot of local politicians and some people in Tallahassee call them bullies because they have a legion of lobbyists."

Now, the big question is: What will actually happen when this powerful mini-government suddenly dissolves?

The state was able to circumvent that "in perpetuity" requirement by targeting any special districts made *before* the year the state constitution was ratified.

"... But they also will be considering termination of all special districts that were enacted in Florida prior to 1968, and that includes the Reedy Creek Improvement District," DeSantis said.

So, while this move might be legal, the bill doesn't address those pesky municipal bonds mentioned earlier — since bonds are debts, and someone always has to pay debts.

State law dictates that when a special district is dissolved, paying its debt falls to the area's local government. For Reedy Creek, there are four local governments that would get the burden.

The state has one year to figure out where those debts are going, since the law goes into effect in June 2023. Though DeSantis insists Disney will eat the cost, the bill doesn't detail how, and it's unclear what legislative options he has left.

"It's clear that this was not thought through on the legislative level either by the governor's office and certainly not by the legislators," Rozsa said. "They barely debated it. Disney has the strong hand here. Ready Creek Improvement District has a strong hand."

Taxes in the surrounding counties could rise up to 25%. Now all eyes are on DeSantis to see if this deal may cement his status as a rising GOP star or politically backfire for his re-election campaign later this year.