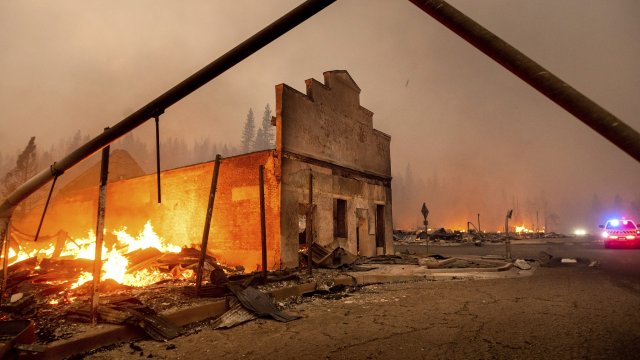 California's largest wildfire destroyed the small town of Greenville late Wednesday. The fire grew by 24,000 acres in less than 24 hours.

California’s largest wildfire destroyed the small town of Greenville late on Wednesday. The Dixie Fire swept through the town, burning houses and buildings.

It destroyed homes, businesses and cars in the historic town with a population of 2,100.

Late on Wednesday, the Plumas County Sheriff’s Office posted an urgent warning encouraging residents to evacuate. The law enforcement agency told residents its officers may not be able to save them if they stayed home.

Almost every building in Greenville was destroyed by the Dixie Fire.

LaMalfa said politicians in Sacramento and Washington, D.C., must put politics aside and work together to find a realistic solution to the wildfires.

The Dixie Fire is just one of 100 large fires burning across the Pacific Northwest and the upper Plains. There were nine new large fires ignited yesterday. The active fires have burned 2 million acres.

Red flag warnings throughout the region remained in place all day. The Dixie Fire Incident Command warned residents to be prepared to evacuate as the fire was likely to expand throughout the day on Thursday.

“We're going to have those winds out of the southwest pushing this, so we're going to continue to see some growth in here, “ said Jake Cagle, operations section chief of Dixie Fire Incident Command.

Firefighters worked around the clock to combat the massive blaze. Forecasts predicted slightly better weather forecasts for the next 24 hours.