Novak Djokovic In Limbo As He Fights Deportation From Australia 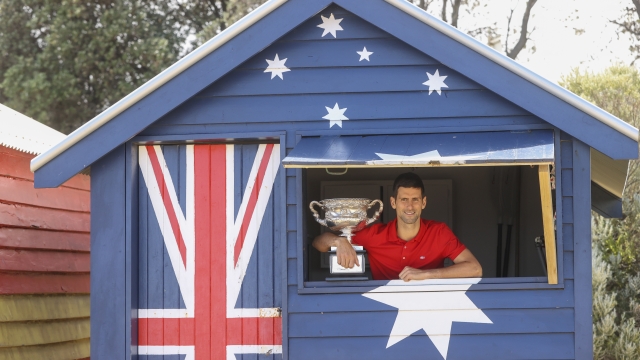 His bid to get around vaccine requirements so he could play in the Australian Open has triggered allegations of special treatment.

Locked in a dispute over his COVID-19 vaccination status, Novak Djokovic was confined to an immigration detention hotel in Australia on Thursday as the No. 1 men's tennis player in the world awaited a court ruling on whether he can compete in the Australian Open later this month.

Djokovic, a vocal skeptic of vaccines, had traveled to Australia after Victoria state authorities granted him an exemption to the country's strict vaccination rules. But when he arrived late Wednesday, the Australian Border Force rejected his exemption as invalid and barred him from entering the country.

A court hearing on his bid to stave off deportation was set for Monday, while the 34-year-old Serbian and defending Australian Open champion was forced to wait it out in Melbourne at a secure hotel used by immigration officials to house asylum seekers and refugees.

The tournament begins on Jan. 17.

Djokovic's bid to get around the vaccine requirements so that he could play has caused an uproar and triggered allegations of special treatment in Australia, where people spent months in lockdown and endured harsh travel restrictions at the height of the pandemic.

After his long-haul flight, Djokovic spent the night trying to convince authorities he had the necessary documentation, to no avail.

Health Minister Greg Hunt said the athlete's visa was canceled after border officials reviewed Djokovic's medical exemption and looked at "the integrity and the evidence behind it."

While Djokovic has spoken out against vaccines, he has steadfastly refused to say whether he has gotten any shots against the coronavirus, though it is widely presumed he would not have sought an exemption if he had been vaccinated.

Federal Circuit Judge Anthony Kelly adjourned Djokovic's case to Monday. A lawyer for the government agreed the nine-time Australian Open champion and winner of 20 major titles should not be deported before then.

"I feel terrible since yesterday that they are keeping him as a prisoner. It's not fair. It's not human. I hope that he will win," Djokovic's mother, Dijana, said after speaking with him briefly by telephone from Belgrade.

She added: "Terrible, terrible accommodation. It's just some small immigration hotel, if it's hotel at all."

Serbian President Aleksandar Vucic said that he had spoken to Djokovic and that his government asked that the athlete be allowed to move to a house he has rented and "not to be in that infamous hotel."

He added that Djokovic has been treated differently from other players.

"I'm afraid that this overkill will continue," Vucic said. "When you can't beat someone, then you do such things."

Asked about the confusion in Djokovic's case, Morrison said the onus is on the traveler to have the proper documentation on arrival.

The prime minister rejected any suggestion that Djokovic was being singled out but acknowledged that other players may be in Australia on the same type of medical exemption.

"One of the things the Border Force does is they act on intelligence to direct their attention to potential arrivals," he said. "When you get people making public statements about what they say they have, and they're going to do, they draw significant attention to themselves."

Anyone who does that, he said, "whether they're a celebrity, a politician, a tennis player ... they can expect to be asked questions more than others before you come."

The medical exemption applications from players, their teams and tournament officials were vetted by two independent panels of experts.

Critics questioned what grounds Djokovic could have for the exemption, while supporters argued he has a right to privacy and freedom of choice.

Many Australians who have struggled to obtain COVID-19 tests or have been forced into isolation saw a double standard.

Tension has grown amid another surge of COVID-19 in the country. Victoria state recorded six deaths and nearly 22,000 new cases on Thursday, the biggest one-day jump in the caseload since the pandemic began.

Australian Open tournament director Craig Tiley on Wednesday defended the "completely legitimate application and process" and insisted there was no special treatment for Djokovic.

Twenty-six people connected with the tournament applied for a medical exemption and, Tiley said, only a "handful" were granted. None of those have been publicly identified.

Acceptable reasons for an exemption include major medical conditions and serious reactions to a previous dose of the COVID-19 vaccine.

Evidence of a COVID-19 infection within the previous six months has also been widely reported to be grounds for an exemption, but that appears to be a matter of dispute between federal and state authorities.

Djokovic tested positive for the coronavirus in June 2020 after he played in a series of exhibition matches that he organized without social distancing amid the pandemic.