Do Billion-Dollar Fines Make A Difference To Big Banks? 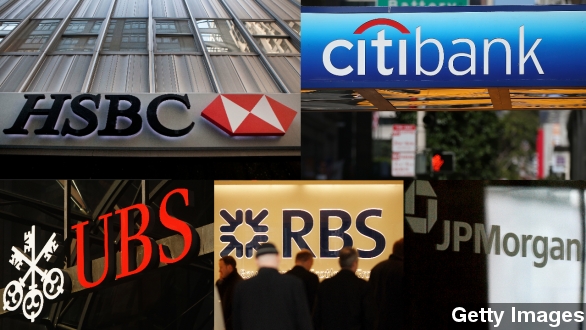 International regulators are hitting a handful of banks with more than $4 billion in fines. Will they even notice?

International regulators hit a handful of banks — HSBC, Royal Bank of Scotland, JPMorgan Chase, Citibank and UBS  — with a total of $4.25 billion in fines, to be exact.

The reason is a little complicated, but it basically has to do with foreign exchange — and how big banks manipulated the exchange rate between different currencies. David Gillen of The New York Times explains.

"Some traders in London have been rigging it to their own advantage. The wrap is these London traders have been colluding with each other. ... They supposedly met up in electronic chat rooms to push currencies one way or another at the very last second."

So the traders artificially adjusted the exchange rate to benefit their own interests, regardless of the impact it would have on the clients they were supposed to be trading for. (Video via France 24)

The regulators are also looking to change their strategy and admit they're not sure how long this collusion was happening before they found out.

MARTIN WHEATLEY VIA CNN: "Frankly, we didn't look before 2008. It may well have been going on before 2008 ... The second thing we're doing is putting more responsibility on individuals because at the end of the day, while organizations can have poor systems and controls, it's individuals who do bad things."

But Wednesday's fines were on the banks, not the individuals involved in the rigging, which raised eyebrows.

BRONWYN CURTIS, BBC: "I think that's the problem. These fines, the banks take them on board they come out of profits so they hit shareholders more than they hit the people that actually made the mistakes."

As The New York Times reports, the fines didn't come as a surprise and their impact might be limited because they "are unlikely to seriously impinge on the banks' balance sheets. Many of the lenders had signaled in recent weeks that a settlement was coming, with several setting aside money for fines and other charges, or revising their third-quarter results to reflect the effect of a potential deal."

To prevent this kind of collusion from happening in the future, regulators say they plan on being more involved in checking the systems and controls banks implement to try to stop it before it starts.

This video contains images from Getty Images and music from Pierlo / CC BY 3.0.