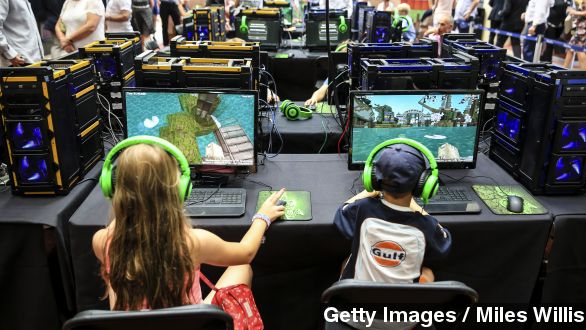 More and more studies are showing positive benefits to playing video games, but the jury is still out on brain training programs.

We've all heard how we should be keeping our brains active, and there are no end of services dedicated to helping you accomplish that, promising to make you smarter or improve your memory by training your brain.

But instead of making 15 minutes of "brain training" part of your normal routine, what if you could get that mental boost from games that are meant for fun rather than exercise?

Participants were assigned to spend eight hours playing one of the games over two weeks. They were given cognitive tests both before and after their gaming homework.

And the researchers say Portal 2 is king. While the Lumosity group saw no changes in their scores, the Portal 2 group saw gains in problem solving, spatial skill and persistence tests.

Of course, saying Portal 2 is the new brain training champion is a bit of a stretch. Lumosity advertises itself as helping your brain improve over time, not just with the handful of sessions described in the study.

But this does highlight something interesting: lots of recent studies have shown that video games do affect the brain in some positive ways.

One study found that gamers who were assigned to play Super Mario 64 for 30 minutes a day saw gray matter increases in parts of the brain related to spatial reasoning, problem solving and fine motor skills.

Another found that having older adults play Blizzard's popular World of Warcraft online game boosted cognitive abilities — particularly in those seniors who scored the lowest on the initial tests. One of the researchers said, "The people who needed it most ... saw the most improvement."

Video games seem particularly good at strengthening areas of the brain related to spatial reasoning and problem solving — not surprising, since so many games focus on navigating virtual worlds and solving puzzles.

But, oddly enough, the jury is still out on those games meant specifically to train your brain. While some studies have shown they can improve brain function, most have found either no benefit or mixed results.

Of course, there can be too much of a good thing: studies have also shown that spending too much time on video games can influence mood and social skills. For the moment, most experts recommend limiting gaming to around an hour a day.