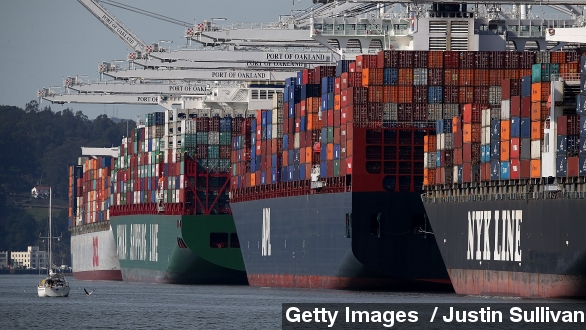 West coast dock workers are expected to be back on the job Saturday, with months of backlogged cargo to work through.

Dock workers reached an agreement Friday night that’s expected to restart shipping across the entire western coast of the U.S.

A new tentative five-year contract ends nine months of standoffs between workers with the International Longshore and Warehouse Union and their employers, the Pacific Maritime Association.

The final point of contention was a new system for arbitration. The two sides reportedly reached agreements on larger issues, such as wages and benefits, weeks ago.

The White House dispatched Labor Secretary Thomas Perez to push the deal through this week. Perez told reporters he’d received an ultimatum: “That was the direction from the president: Get this done now, but if necessary, in Washington.”

The months-long impasse has left fully loaded container ships waiting in bays up and down the West Coast. While the union members kept working without a contract saying they were laboring in good faith, employers accused them of intentionally slowing down port activity.

"Normally, they come into port, they offload their containers and they're finished. They leave. Time is money," said U.S. Coast Guard Captain Jennifer Williams.

The stalls sent ripples through the entire U.S. economy from agriculture to manufacturing; imports to exports.

“There is a lot of wine sitting in the port we cannot get to. [Customers] will walk out. We’ve built some core brands over the years, and people expect to walk in and get that brand and it is not available to us,” store manager Eric Cripe told KPIX.

“What kind of good are we talking about here?”

“Everything. Everything. You’re talking about agricultural products going out of this country; any manufactured good that are going overseas,” said Fox Business’ Dagen McDowell.

“So it’s not just goods coming in. It’s goods going out, which is the impact for us.”

With a new contract, dock workers expect to return to work immediately. They’ll have to tackle the backlog of ships and cargo still waiting in the bays, a task that could take months.