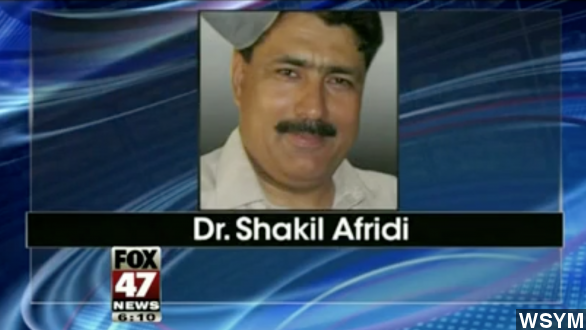 The doctor who helped the CIA track down Osama bin Laden during a secret raid in 2011 has been charged with murder.

The doctor who helped the CIA find Osama bin Laden during a secret raid in 2011 has been charged with murder.

Shakil Afridi's lawyer announced Friday morning his client had been charged in connection with the death of a patient he operated on eight years ago. (Via BBC)

The patient's mother reportedly filed a complaint saying Afridi wasn't authorized to perform an appendectomy on her son because he was a physician, not a surgeon. (Via WSYM)

But Afridi's attorney says the case has no merit because too much time has passed between the patient's death and the complaint.

The doctor is currently behind bars after Pakistani authorities arrested him for his alleged association with militant group Lashkar-e-Islam, which he denies. (Via Fox News)

He was ​given a 33-year prison sentence in 2012 for "conspiracy against the state." His sentence has since been overturned because of "procedural errors," and a retrial has been ordered. (Via The Guardian)

But Afridi's murder charge could hinder his chances of going free and, on a larger scale, sour relations between the U.S. and Pakistan even more.

Afridi was regarded by U.S. officials as a hero after he helped track down bin Laden. But Pakistan was furious, and the relationship between the two countries took a turn for the worse. (Via CNN)

After bin Laden's death, Pakistan accused the doctor of running a fake vaccination program that helped the U.S. find the Al-Qaeda leader.

Afridi's staff reportedly collected DNA samples from one of the children at bin Laden's compound, which helped show the CIA its target was hiding there. (Via ABC)

Afridi is scheduled to stand trial for the murder charge next month.