Doctors In Sudan Are Key To The Current Protests 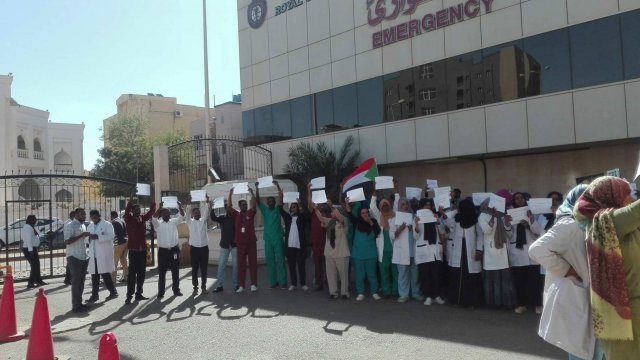 Protests in Sudan have been going on since mid-December, and some of the most involved protesters are doctors. That's partly because the groundwork of today's protests started with the creation of a doctor's union in 2016.

"At the beginning we were protesting for the low wages. That created the doctor union. The idea of a doctor's union is that all the issues of every doctor is discussed," said Dr. Kholoud El-naeem, a general practitioner in Sudan. "The hospitals and the conditions in the country are really bad. All of the basic equipment in a hospital that should be available for the patients, they're not available in the hospitals. So that over the years and low salaries created a sort of anger. … We actually see people dying because of ridiculous causes. People died because they don't have the money to buy, for example, the basic needs."

The 2016 strike saw doctors refusing non-emergency medical care to patients. The government ended up jailing several of the union's founders, accusing them of putting the country's health care at risk.

While the idea of an independent trade union may seem pretty standard, it's something that's been illegal in Sudan since President Omar al-Bashir took power three decades ago.

A group called the Sudanese Professionals Association, or SPA, has taken on much of the organizing and scheduling of the protests. The demonstrations include doctor sit-ins. But protesters say they're being scrutinized and reprimanded by the government.

"Once they know that you're a doctor, if you got caught protesting, you're going to last more days in prison because of the interrogation. You don't get the [same] treatment as other professionals ... because they think that we have a strong association with the leader of SPA. That's why ... they think that. They just want ... any lead to lead them to those people," El-naeem said.

In January, one doctor was killed while witnesses say he was trying to help injured protesters. Activists say he was targeted by the government, but the government said the weapon used to kill him did not belong to Sudanese police.

His death didn't stop protests — in fact, it may have further encouraged them. So far, the doctor's union says at least 57 people have died in the Sudan protests.