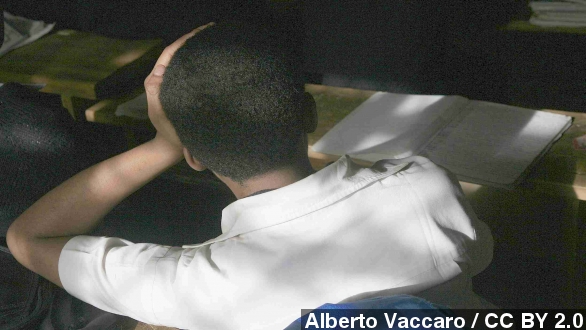 The American Academy of Pediatrics is the latest group pushing for middle schools and high schools to start later, for the sake of their kids.

Another school year is starting up across the country, and that apparently means another conversation about start-times.

In a statement Monday, the American Academy of Pediatrics said it's advocating start-times for middle and high schools be pushed back to 8:30 or later, writing, "Doing so will align school schedules to the biological sleep rhythms of adolescents, whose sleep-wake cycles begin to shift up to two hours later at the start of puberty."

The report indicated the ideal amount of sleep for adolescents is between 8.5 and 9.5 hours a night, and that 59 percent of 6th through 8th graders and 87 percent of high school students in the U.S. don't get enough. That prompted this reaction from outlets:

​HLN: "Teens apparently need more time to sleep, you know they say it— and they say they shouldn't have to start school until 8:30 or later, well guess what— doctors are saying the same thing!"

FOX NEWS: "Some good news for teenagers, doctors want you to sleep in!"

CNBC: "My kids are starting at like 7, 7:30 — it's ridiculous — Therefore high schools and middle schools should start no earlier than 8:30. That's because the group says the adolescents need more sleep. Yep, I agree with that, for sure."

But it's not really new news: this is an issue that has been discussed for years now, but it always seems to come up around the start of every new school year.

As far back as the mid-1990s, the University of Minnesota conducted a study on a local high school that pushed its start time back by an hour, and found a number of a benefits, including increased attendance, less depression among students and fewer behavioral issues.

Around this same time last year, U.S. Secretary of Education Arne Duncan told Susan Page on the Diane Rehm Show: "I think there's a lot of research, and again kind of common sense, that a lot of teens, you know, struggle to get up at 6 a.m. to get on the bus ... So often we design school systems that work for adults, not for kids."

Duncan stressed later in that interview, though, that the decision should be up to individual school systems, but not many have jumped aboard, with only 15 percent of high schools starting at 8:30 or later, and a majority starting before 8 — according to the AAP.

The AAP is one of the biggest groups to get behind the issue, although it's not immediately clear what effects the group's statement will have in the long run.

This video contains an image from Alberto Vaccaro / CC BY 2.0