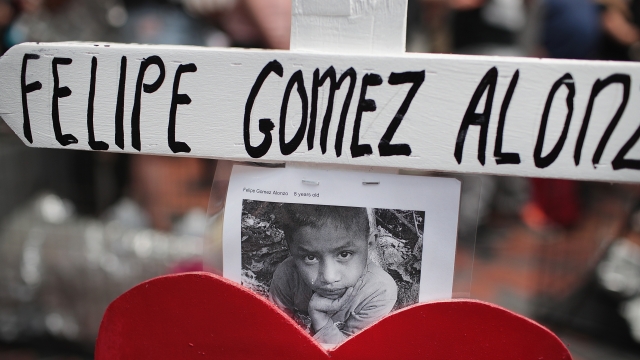 Doctors from Harvard and Johns Hopkins warned of an increased risk of infectious diseases spreading in immigration detention facilities.

Doctors from Johns Hopkins and Harvard universities sent a letter to Congress on Thursday warning about an increased risk of deadly infectious diseases spreading at border facilities. They also urged lawmakers to investigate the deaths of six children in government custody over the past year.

The doctors wrote flu deaths are rare and preventable, but pointed out that three detained migrant children, ages 16, 8 and 2, have recently died of the flu. According to the doctors, that makes the flu death rate in detention facilities at least three per 200,000 children. The rate among U.S. children is one in 600,000.

The doctors wrote: QUOTE "With so many lives at risk, these issues are worthy of congressional investigation. Another influenza season is around the corner and there are other types of infectious diseases that pose a threat to detained populations. Timely action is crucial."

The doctors listed three key reasons the flu is particularly dangerous to migrant children in custody: First, they face lower immunization rates and less access to quality health care than children who live in the U.S. Second, the turnover of migrants in the facilities leads to a greater chance someone will carry the virus in. The doctors say this "revolving door effect" is especially concerning because many facilities designed for short-term detentions are holding migrants for longer periods of time. And third, the children are at higher risk of flu complications while they're in detention.

The letter says doctors "suspect that the Department of Homeland Security and the Department of Health and Human Services may not be following the best practices" when it comes to screening, treating, isolating and preventing the flu at these facilities.

The doctors' letter was addressed to Reps. Rosa DeLauro and Lucille Roybal-Allard, who lead subcommittees that oversee the Health and Human Services and Homeland Security departments.

Roybal-Allard said she's committed to giving CBP the resources it needs to protect children and that "we cannot allow CBP to keep holding children and families in dangerous, overcrowded conditions." She also said she's "heartbroken by the deaths of migrant children in our government's custody and ... will continue to seek a thorough accounting of their deaths."

DeLauro, who chairs the appropriation subcommittee for HHS, vowed to provide more oversight of the agencies. She said the letter is "alarming, but unfortunately not surprising," given the way the agencies are responding to the influx of migrants at the border.

In the letter, the doctors listed what they consider appropriate measures to lower the chance of the flu spreading in border facilities. They also listed questions they recommend be posed to DHS and HHS throughout the investigation.