Apu From 'The Simpsons' May Be Funny, But He's Also A Stereotype 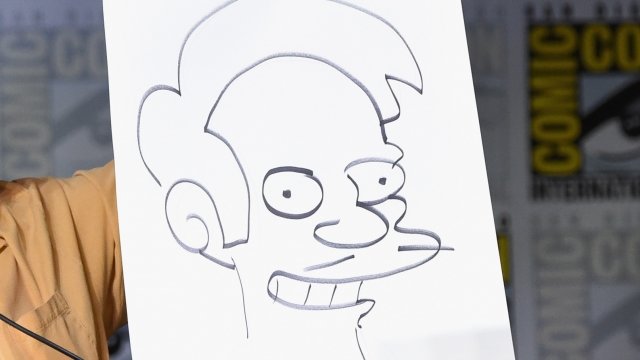 Comedian and Indian-American Hari Kondabolu is the face of a new documentary about the popular character.

"The Simpsons" character Apu Nahasapeemapetilon is getting called out.

In a recent documentary, the Indian character and convenience store owner is marked as a stereotype that perpetuates subliminal racism.

Western Films Made Us Believe There Weren't Black Cowboys

The Wild West wouldn't have been the same without black cowboys.

The character isn't even voiced by an Indian person — he's a white man putting on an accent.

As an Indian-American, the documentary's host, comedian Hari Kondabolu, tackles the topic from a personal place.

Kondabolu told BBC: "Kids in the playground would always mimic the accent. ... What's your comeback for an accent?"

"There are accents that by their nature to white Americans, sound funny," "The Simpsons" former co-executive producer and writer Dana Gould said.

But it's not just the accent. American TV shows are sprinkled with examples of Indian characters who have stereotypical attributes.

"My parents are trying to marry me off to a total stranger; what am I going to do?" the character Rajesh Koothrappali asks on "The Big Bang Theory."

As for "The Simpsons," a big issue with the Apu character is that for a long time, he was one of the few, if only, Indian characters shown on American TV.

Kondabolu said he doesn't want Apu to be killed off the show. But he does want show creators to be more aware of stereotypes and to not perpetuate them in the future.