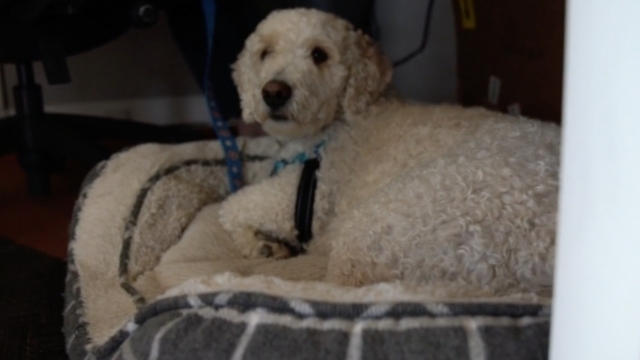 The No. 1 reason dog parents said they're worried about returning to the office is their pet's potential anxiety or loneliness.

More companies may be inclined to adopt dog-friendly policies as employees return to the office."

People are more sensitized to how their animals are feeling about all kinds of things, including maybe and most particularly, what happens when they are no longer working from home," said Philip Tedeschi, executive director and co-founder of the Institute for Human-Animal Connection at the University of Denver.

According to a survey from Rover, more than half of pet parents said they would leave their job to work for a more dog-friendly company. The No. 1 reason dog parents said they're worried about returning to the office is their pet's potential anxiety or loneliness.

"Often the well-being of their animal is highly connected now to their own sense of health and well-being," Tedeschi said. The survey also found that 74% of pet parents are more likely to feel loyalty toward a dog-friendly company. Noodles & Company corporate office has been allowing dogs in the workplace for 27 years.

"In order to make people want to work here or be attracted to work here, we thought let's let them bring their four-legged friends with them as long as they're well-behaved," said Sue Petersen, executive vice president of inclusion, diversity and people at Noodles & Company.

Dogs aren't allowed in any restaurants due to health codes, but Petersen says she believes the company's dog policies and benefits make the company more competitive in the workplace market.

"It's hard to have a bad day when you walk down the hallway and you see three furry friends just walking towards you," she said.

Dog trainers say they're already working with owners to prepare their pups for time apart when in-person work resumes.

As more companies consider pet policies, Tedeschi said it's important to acknowledge not everyone is a pet lover — and some people are allergic."

Some of the ways to mediate these issues of allergies are things like ensuring that there are limited areas that the dog is actually allowed to be in," he said.For those who can't take their pets to work, it's important to make sure their furry companions are comfortable being left at home for an extended time.

"Try to build in that time where you go away, out of your home for maybe an hour or hours, just so they don't have that separation anxiety,” said dog owner Gregg Jacobson.