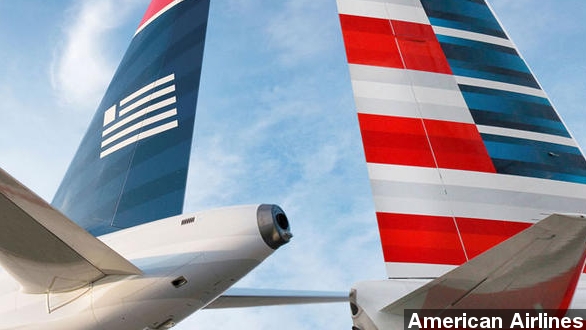 The deal comes after the DOJ filed suit back in August to block the $11 billion merger, fearing it would lead to less competition and higher prices f

After a Department of Justice announcement Tuesday, the proposed merger between airline heavyweights American Airlines and U.S. Airways is now ready for takeoff.

“After months of wrangling the U.S. Justice Department has reached a deal on a merger for U.S. Airways and American Airlines.” (Via YNN)

The deal comes after the DOJ filed suit back in August to block the $11 billion merger, fearing it would lead to less competition, and thus higher prices for consumers. (Via CBS)

Using Washington D.C.’s Ronald Reagan Airport as an example, the complaint read:  "The combined firm would control 69% of the slots at Reagan National Airport, almost six times more than its closest competitor. This would eliminate head-to-head competition at the airport …  It would also effectively foreclose entry or expansion by other airlines." (Via U.S. Department of Justice)

But those fears appear to have been abated, as the DOJ let the merger, which will create the world’s largest airline, go through with a few concessions.

“The heart of this deal really came down to these two airlines giving up some of their landing and takeoff slots at these major airports.”  (Via CNN)​

According to the Los Angeles Times, that will include 52 slots at Ronald Reagan Airport and another 17 at New York’s La Guardia.

If everything goes according to the DOJ's plan, those slots will be filled with lower cost airlines and prices will stay competitive.

But some are arguing the move is still a bad deal for consumers. As USA Today notes, the merger will eliminate some 44 outgoing flights at Reagan National.

And in a piece titled "The Sky-High Price You’ll Pay for Airline Mergers" a writer for Time adds, "When top competitors merge their combined pricing power improves; heck, it’s the whole point. They can reduce the number of seats available in a market, raise fares—or both."

Then, of course, there’s the overall decline in the number of major U.S. airline carriers, from 10 to four in just more than a decade. (Via CNN)

Some, however, think it’s still a good deal all around.

Quoted by The Dallas Morning News, a representative for the union group "Allied Pilots Association at American" said, "This is a good day for our pilot families’ job security, our customers, the communities we serve and the U.S. airline industry."

According to Barron’s, shares of AMR Corp., American Airline’s parent company, soared after the DOJ announcement — increasing by as much as 18 ​percent around noon on Tuesday.