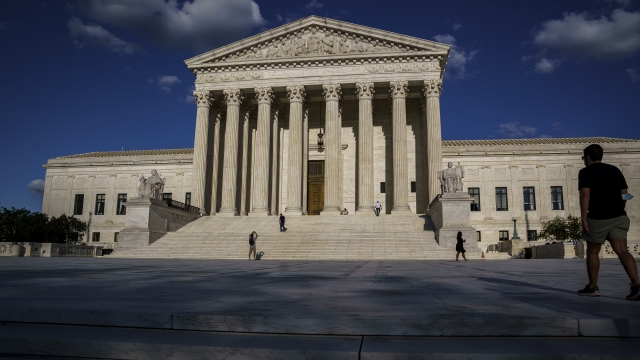 The Justice Department has asked a federal court in Texas to stop the enforcement of a new state law that bans most abortions in the state while it decides the case.

The Texas law, known as SB8, prohibits abortions once medical professionals can detect cardiac activity — usually around six weeks, before some women know they’re pregnant. Courts have blocked other states from imposing similar restrictions, but Texas’ law differs significantly because it leaves enforcement to private citizens through civil lawsuits instead of criminal prosecutors.

The law went into effect earlier this month after the Supreme Court declined an emergency appeal from abortion providers asking that the law be stayed.

In Tuesday night's emergency motion in the U.S. District Court for the Western District of Texas, Austin Division, the Justice Department said “a court may enter a temporary restraining order or a preliminary injunction as a means of preventing harm to the movant before the court can fully adjudicate the claims in dispute.”

The case was assigned to U.S. District Judge Robert Pitman.

Last week, the Justice Department filed a lawsuit in Texas asking a federal judge to declare that the law is invalid because it unlawfully infringes on the constitutional rights of women and violates the Supremacy Clause of the Constitution, which says federal law supersedes state law.

The department made a similar argument in seeking the restraining order or temporary injunction and said that it's challenge would likely be successful.

“When other States have enacted laws abridging reproductive rights to the extent that S.B. 8 does, courts have enjoined enforcement of the laws before they could take effect. In an effort to avoid that result, Texas devised an unprecedented scheme that seeks to deny women and providers the ability to challenge S.B. 8 in federal court. This attempt to shield a plainly unconstitutional law from review cannot stand.”

Under the Texas law, someone could bring a lawsuit — even if they have no connection to the woman getting an abortion — and could be entitled to at least $10,000 in damages if they prevail in court.

The Texas law is the nation’s biggest curb to abortion since the Supreme Court affirmed in the landmark 1973 decision Roe v. Wade that women have a constitutional right to an abortion.

Abortion providers have said they will comply, but already some of Texas’ roughly two dozen abortion clinics have temporarily stopped offering abortion services altogether. Clinics in neighboring states, meanwhile, have seen a surge in patients from Texas.