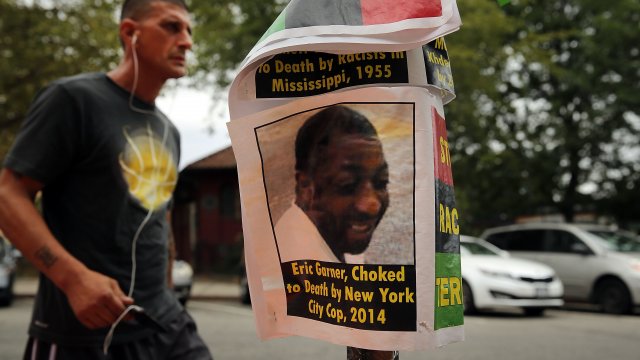 The Department of Justice will not bring charges against the officer who choked Eric Garner, the unarmed black man who died while he was arrested.

The Department of Justice has declined to pursue federal charges against a New York City Police officer tied to Eric Garner's death.

Investigators had to decide this week whether to bring charges against NYPD officer Daniel Pantaleo. He is was one of the officers who tried to arrest Garner. This decision marks the end of a five-year investigation and comes one day before the fifth anniversary of his death.

Garner died as police tried to arrest him in 2014. The unarmed black man was accused of selling loose cigarettes. Pantaleo wrapped his arm around Garner's neck while other officers held him down on the ground. A medical examiner said the chokehold contributed to Garner's death.

Video of the incident showed Garner saying "I can't breathe" 11 times during the arrest. It became a rallying cry for activists, who demanded punishment of the officers and reforms in police use of force.

CNN and the Associated Press report that Attorney General William Barr made the decision not to bring charges after federal prosecutors couldn't agree on filing a criminal case.

NYPD still employs Pantaleo, who is on desk duty. He wrapped up his disciplinary hearing in June. Police Commissioner James O'Neill will decide his punishment, including the possibility of firing the officer.