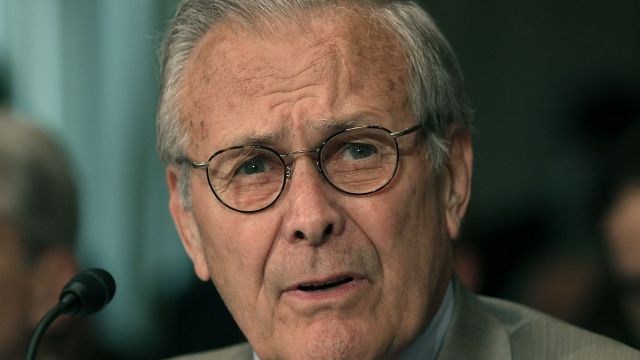 Former Secretary of Defense Donald Rumsfeld enjoys playing a solitaire game played by Winston Churchill so much, he helped bring it to the app store.

Want to make sure your solitaire app stands out from the glut of mobile card games? Step one: Tie it to a famous historical figure like Winston Churchill.

Rumsfeld is an avid fan of a particular variant of solitaire Churchill supposedly played during the war, and the retired politician teamed up with a D.C. design firm and an Indiana coder to preserve the game for digital posterity.

The result is "Churchill Solitaire," which The Wall Street Journal dubs "likely the only video game developed by an 83-year-old man using a Dictaphone to record memos for the programmers."

The Journal's in-depth piece on the creation of "Churchill Solitaire" is full of amazing anecdotes from Rumsfeld's brush with game design: his frustration with bug testing, his outrage when a server wipe erases his progress, his disdain for the cowardly undo button.

But now that Rumsfeld's worked through the teething pains, we're hoping he sticks with his new career as a game designer. Imagine a Rumsfeld-made management sim set in the Pentagon, for example. Or a hidden-object game about WMDs in Iraq.

"Churchill Solitaire" is available now on the Apple App Store and is free to download; the game sells levels and uses of the hint or undo buttons to get revenue. Rumsfeld says he's going to donate his share of the proceeds to charity.