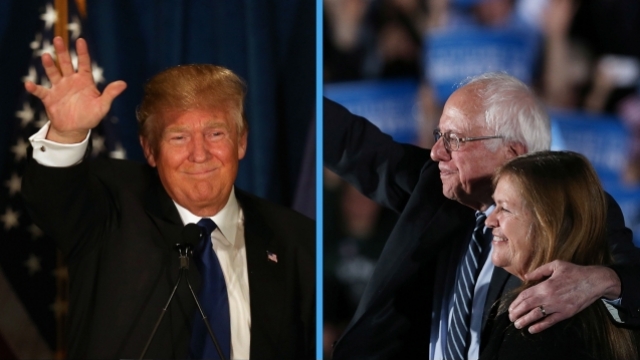 Trump crushed his competition Tuesday, capturing roughly 35 percent of the vote. And Sanders won his primary by over 20 percent.

After finishing second in the Iowa caucuses, Trump crushed his competition Tuesday, capturing roughly 35 percent of the vote. It was more than double the second-place finisher ... (Video via CNBC)

who, interestingly, wasn't Marco Rubio or Ted Cruz, but John Kasich. The Ohio governor only captured 2 percent of the vote in Iowa. He said, "There is magic in the air with this campaign." (Video via Kasich for America / ABC)

Rubio credited his disappointing showing to a poor debate performance, saying, "That will never happen again." (Video via Marco Rubio for President)

The word "expected" is the battleground on the Democratic side. Sanders won his primary by over 20 percent, but many thought he needed a hefty win. (Video via PBS)

Most pre-polling had him well in the lead, and Iowa and New Hampshire's voters are characterized as "white liberals," which many have argued is Sanders' demographic.

However, how convincingly can Hillary Clinton claim to have expected the loss? In June 2015, she led Sanders by nearly 40 points. (Video via Hillary for America)

The competitions now move on to South Carolina and Nevada.

This video includes images from Getty Images and music from Black Ant / CC BY 3.0.