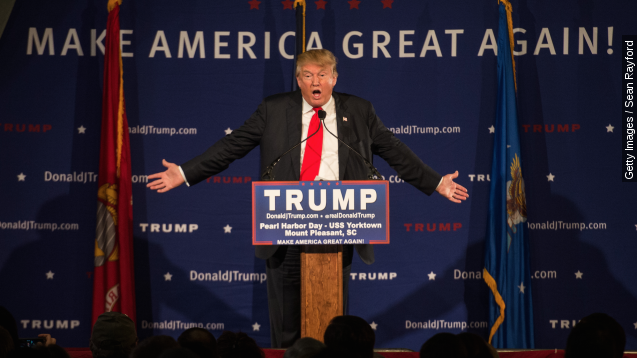 "Donald J. Trump is calling for a total and complete shutdown of Muslims entering the United States," said Donald Trump while at the USS Yorktown in December.

Yup. Trump’s call to ban all Muslims from entering the U.S. is being used as propaganda by Al-Shabab in a 52-minute-long documentary.

It was sandwiched between clips of Anwar al-Awlaki, a prominent Al-Qaeda imam who was killed in a U.S. drone strike in 2011.

Essentially, Al-Shabab is trying to convince U.S. Muslims that their country is against them, and Trump’s rhetoric is part of their proof.

Muslims aren’t the only ones Al-Shabab is trying to reach out to, though. Using a mix of white supremacist videos and footage of unrest in places like Ferguson and Baltimore, the group tries to paint U.S. as inherently racist toward African-Americans. They are then invited to convert to Islam.

Al-Qaeda and its affiliates have been struggling to compete with ISIS and the deluge of propaganda it releases. ISIS has even attempted to court Al-Shabab over to its side with multiple videos.

The militant group is currently fighting to regain its foothold in Somalia against the Somali government and an African Union coalition.

This video includes images from Getty Images and music "does not compute" by Birocratic / CC BY 3.0.