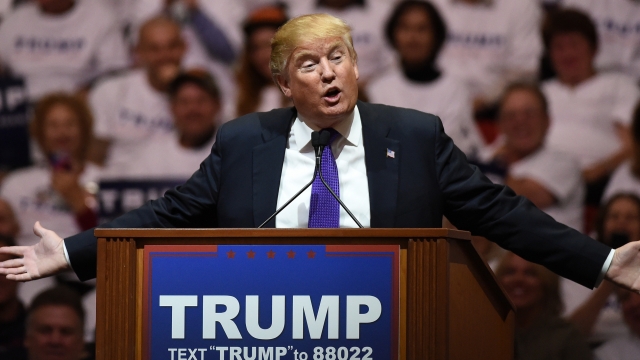 Donald Trump suggested he should be allowed to punch protesters after he was interrupted while campaigning in Las Vegas.

Donald Trump really doesn't like it when people interrupt his campaign rallies.

Trump's security team reportedly escorted a protester out of the rally as the Republican presidential candidate spoke to supporters Monday evening in Las Vegas.

"You know what I hate? There is a guy totally disruptive, throwing punches; we're not allowed to punch back anymore. I love the old days. You know what they used to do to guys like that when they were in a place like this? They would be carried out in a stretcher," said Trump.

It's not clear what the man was protesting, but CNN reports he did not appear to be fighting security officers, like Trump claimed.

Earlier in the rally, a man held up a sign reading "Veterans to Mr. Trump: End hate speech against Muslims," but it's unclear if that man is connected to the protester who was thrown out.

Trump has been pretty blunt about what he thinks about protesters at his campaign rallies in the past.

When a Black Lives Matter protester was reportedly attacked by Trump supporters at one of his rallies, Trump said this to Fox News:

"Maybe he should have been roughed up, because it was absolutely disgusting what he was doing."

Republicans are voting in the Nevada caucuses Tuesday. Democrats already cast their votes Saturday, with Hillary Clinton coming out on top.

This video includes clips from Donald J. Trump for President, Inc. and images from Getty Images.