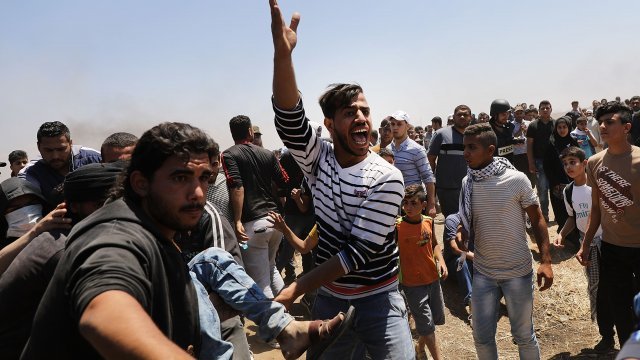 Dozens of Palestinian demonstrators were killed by Israeli forces on the same day the U.S. opened an embassy to Israel in Jerusalem.

Monday marked the deadliest day the Gaza Strip has seen in years. Palestinian officials say Israeli forces have killed dozens of protesters and injured hundreds more near the border between Gaza and Israel.

The violence comes as the U.S. opens its new Israel embassy in the contested city of Jerusalem. This has sparked new protests, including in the West Bank.

But in Gaza, protesters have focused more on the border fence separating them from Israel. Israeli troops say demonstrators are trying to breach the fence and defy a decade-old blockade on the region.

Israel pulled troops and settlers out of Gaza in 2005 but still maintains tight control of the region's land, sea and air borders. The blockade has been blamed for stifling Gaza's economy and leading to shortages of water, electricity and medicine in the region.

Deadly Gaza Protests Continue As US Embassy Opens In Jerusalem

Thousands of Palestinians demonstrated in the West Bank and Gaza as the U.S. Embassy was relocated to Jerusalem.

The blockade has also been marked with violent conflict between Israel and Gaza's ruling party Hamas, which is considered a terrorist group by the U.S. Clashes in 2014 left more than 2,100 Palestinians and 70 Israelis dead.

Now Israel accuses Hamas of orchestrating the weeks of protests at the Gaza border, using the demonstrators as a shield to conduct attacks. Protest organizers say they're demonstrating for the right to return to land taken during the founding of Israel 70 years ago.