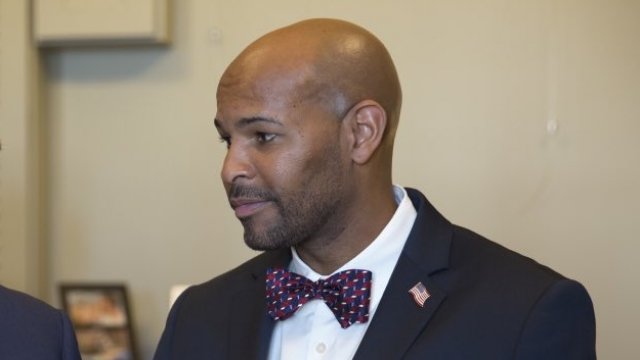 The anesthesiologist was sworn in to his new position by Vice President Mike Pence on Tuesday.

"To borrow a phrase from our president, let's all work together to make American health great again. Thank you very much," Adams said during his swearing-in ceremony.

Vice President Mike Pence swore in the anesthesiologist to the position Tuesday.

The ceremony was almost three years after then-Gov. Pence tapped Adams to be Indiana's health commissioner.

Pence praised Adams' efforts during his time in Indiana — including his work to combat high infant mortality rates, Ebola and an opioid-fueled HIV outbreak.

"As I saw firsthand, Dr. Jerome Adams has an extraordinary gift for empathy, and he brought that gift to his years in public service," Pence said.

Adams said during his confirmation hearing last month he wants to put science ahead of politics in a "sympathetic and empathetic way."

And he vowed to focus on the U.S. opioid epidemic, untreated mental illness and other difficult health problems.

As the "nation's doctor," Adams will advise Americans how they can be healthier and how they can reduce their risk of injury and illness. He will also oversee the Public Health Service Commissioned Corps.