Chicago 'Dreamers' Remind Public That DACA Is Still Not Safe 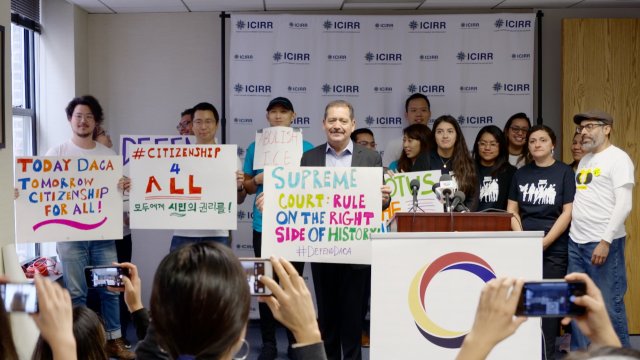 Two years ago, Trump tried to rescind DACA. Immigrant advocates used the 'solemn' anniversary to remind people that the program is still in jeopardy.

"We are here today. Because September 5th, two years ago, DACA was rescinded. But we are still here."

Exactly two years ago, President Donald Trump tried to rescind DACA, the program that protects from deportation more than 700,000 undocumented immigrants who were brought here by their parents at a young age.

A federal judge quickly blocked that move and DACA recipients have been able to renew their two-year protections ever since. But the fate and legality of the Obama-era program is still in jeopardy as the Supreme Court announced it would review the case. DACA recipients and their allies have gathered in Chicago to mark the anniversary and "put DACA back on the national map."

"We're reminding people all over the country, that this group of people continue to suffer, live in constant fear, that this is no way to treat aspiring Americans, young people who have grown up with our children with our grandchildren in this country. They deserve better."

The Trump administration says President Obama abused his executive powers when creating DACA without congressional approval. The White House also argues that it has broad powers to reverse actions from previous administrations.

The Supreme Court recently announced it will review President Trump's decision to terminate the protection. That means the court could announce a final decision on the highly political case next summer — in the thick of the 2020 presidential election.

"If we lose the case, they might revoked all the work permit out there. So it is really important for DACA recipients and all the folks who care about this issue to know that you might lose your job right away or you can be deported."

In the meantime, immigrant advocates are calling on Congress and the White House to come up with a deal that would give DACA recipients — or Dreamers — a pathway to citizenship. Such a deal has been on the table many times before but has never materialized.

"If people want to be perceived as being rational and American, then immigration reform, especially in this dose needs to happen now."

In June, Congressman Jesús García and his Democratic colleagues in the House passed a bill to legalize DACA recipients and other undocumented immigrants. But the legislation died in the Republican-controlled Senate. Critics of the bill viewed it as an amnesty for law-breakers and said it would encourage more illegal immigration and aggravate the "crisis" at the southern border.