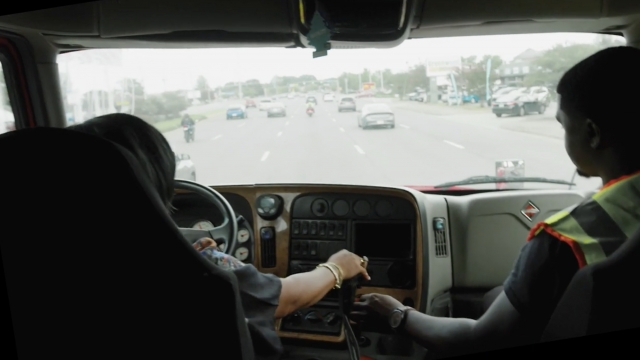 Amid a truck driver shortage, a push to add diversity to the force is making way for safety and mindset changes in the industry.

Josephine Copeland’s lifelong dream is behind the wheel of a long-haul truck.

At age 49 and an empty nester, she came to Dudley’s Driving Center in Virginia to make her dream a reality — and just in time.

According to the American Trucking Association, the truck driver shortage reached industry highs in 2021.

One way to fill the gap has been finding ways to add diversity, meaning minorities. Young people and women represent only 7% of drivers.

Erica Denney, with the American Trucking Association's Women in Motion program, says the first step is getting rid of the idea the trucking isn’t for women.

"There's a stigma to the industry of white men, and that's just not what we are anymore," Denney said.

The second step is addressing safety.

"It's an all-industry issue," Denney said. "But obviously if you're a female truck driver and you get to a truck stop, they're out of spaces and you're going in the back where there isn't lighting — it's dark, it's far, it can be a bit intimidating."

The group is working with lawmakers to add more well-lit parking areas. ATA says their drivers are also actively working to change the status quo by recruiting in diverse areas.

"One of the studies we did, we focused on Baltimore," said Nick Geale, vice president of workforce and labor policy at the American Trucking Association. "The vast majority of folks in these urban environments never hear about trucking as an opportunity, and our members have not necessarily focused on hiring in those locations."

Why Is The Trucking Industry Changing?

During the pandemic the trucking industry struggled due to loss of drivers. Now the industry is picking back up as driver enrollment increases.

Getting behind the wheel starts at driving school, with a written exam and a lot of practice. That’s why there’s also a call to add more diverse instructors: to give a sense of commonality.

Emanuell Robertson became an instructor at Dudley’s to encourage others like him.

"I look at it as helping the community escape that poverty... because it's life changing," Robertson said. "It saved my life.”

One Dudley family grandmother, Sadie Belle Howell Dudley, opened a female, Black-owned driving school in 1959. The Dudleys of today are hoping to bring those wide-open spaces to a new generation of drivers by expanding with Virginia’s first Black-owned commercial driver’s license school.

"Certain schools you go to, the atmosphere might not be so pleasant," said Thomas Dudley Jr., co-owner of Dudley's Driving Center. "A lot of people have been turned down where they don't even want to get a CDL because of the environment."

Copeland says the environment and a mission to fulfill a dream is what has brought her here.

"I love the road, and I love just the peace of mind of being in there by yourself," Copeland said.